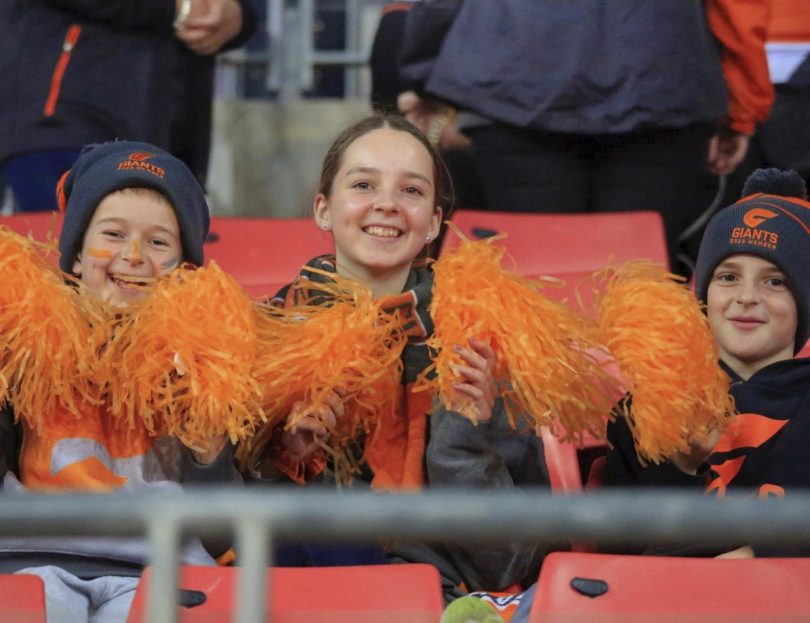 SPREAD around Giants Stadium and braving a chilly night, nearly 4,000 footy fans were on hand to watch Greater Western Sydney beat the Hawthorn by 34 points.

Kicking eight goals between them, GWS forwards Harry Himmelberg and Jeremy Finlayson were the dominant duo for the Giants.
Although fans could be forgiven for wondering what was going on when Shane Mumford put through a goal of his own. It was 1,051 days between goals for the big man but his teammates were happy to help him celebrate the goal, particularly since it was also his 34th birthday.
Josh Kelly, with 30 disposals, Harry Perryman, with 28, and Nick Haynes, with 21, were also each crucial in controlling the flow of the game for the home-side.
Snaring their second win in a row with a final scoreline of 13.5 (83) to 7.7 (49), the Giants now move into the top eight and while coach Leon Cameron was pleased by the win, he noted that things were only going to get harder with all AFL teams facing plenty of challenges both on and off the field.
“It doesn’t matter who you play,” he said.
“There’s things going on outside the footy club as we know.”
Cameron also praised the job the AFL was doing in putting together the season to date.
“We get that privilege to display our talents on the weekend and … fulfil our job, and tonight was a good effort from us,” he said.
“But equally it was good to see three to four thousand Giants fans that clearly haven’t been to the footy for a long, long time at the venue.”