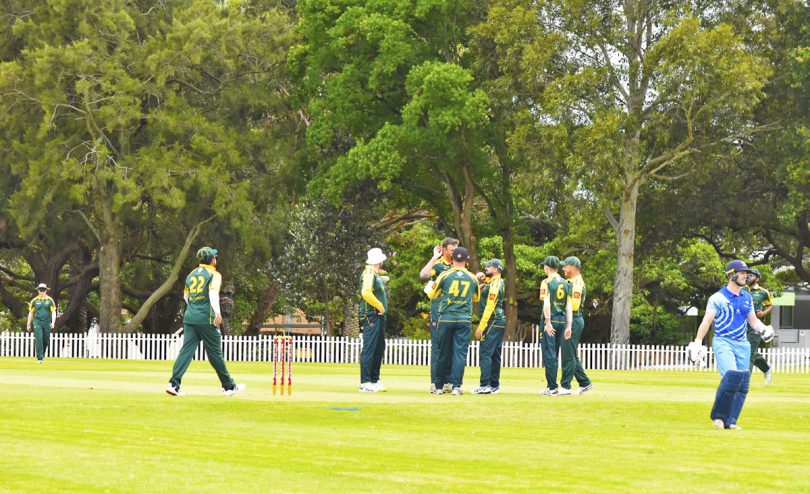 Eagles’ captain Corey Lowe sent Bexley in to bat in tough conditions but the pitch improved rapidly and they were all out for 197 in the 49th over. Pearson bowled well for his 3-42 with Ali taking 3-22. Ex captain Ardil Domingo flew through the air to take an amazingly athletic catch.
The Eagles hauled in the largish total in the 42nd over with 6-199. Ardil Domingo scored 27, skipper Corey Lowe starred with 71 and Asad Usman got 44. The Eagles are sitting in fifth place.
Auburn top the second grade ladder after a strong win against Georges River.
The Eagles were sent in to bat first and were all out for a modest 160. Paramraj Randhawa opened with 52, Fletcher Butterfield hit 22 and Bryce Billington, 44.
A strong innings by the Eagles bowlers, had Georges River out for 139 in the 49th over. Billington completed a fine day by taking 3-27.
Third grade was the only team not to finish in the points after Georges River scored 7-138 and Auburn could only muster 122
In fourth grade, Auburn bowled out Georges River for 151 and sit in second place on their ladder. Pathum Lenaduwa, Suranga Juliyangedon and Gam Thissatheja all took three wickets apiece. In reply Auburn scored 9-154 with Thissatheja, 37, Khubaib Abdullah, 22 and Udesha Arachchi, 21.