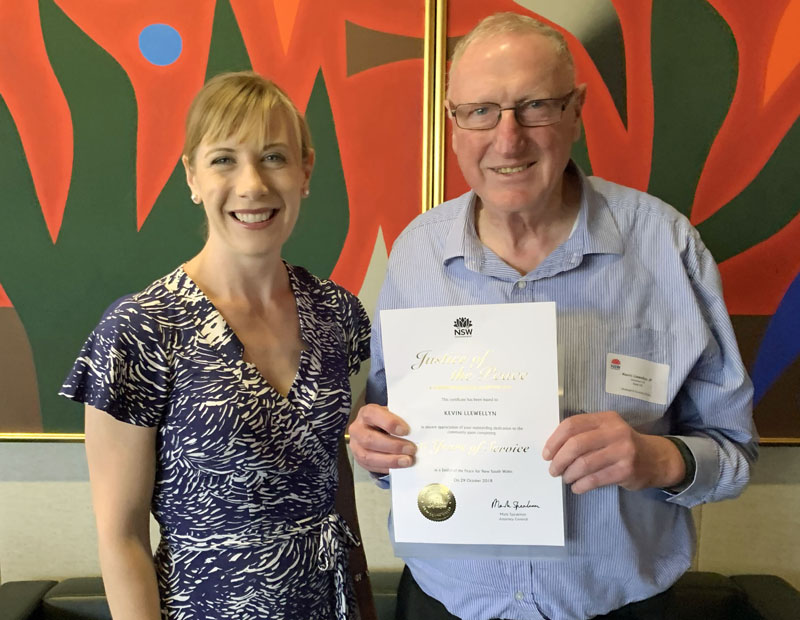 NOTCHING up a half century of service to the community, Kevin Llewellyn was one of more than 150 Justices of the Peace (JPs) recognised in a ceremony at Parliament House on Tuesday.

State MP for Summer Hill, Jo Haylen, was in attendance and said she was honoured to help mark his 50 years of service as a JP.
“Like so many Justices of the Peace, Kevin is deeply committed to public service and has volunteered as an accountant for charitable organisations and many community groups in Marrickville,” she said.
“I am so grateful for the important work Kevin and his fellow Inner West Justices of the Peace offer our community and give him my congratulations on this important achievement.”
Attorney General Mark Speakman said 260 people statewide would receive commemorative certificates after serving the community since man first walked on the Moon.
“Becoming a Justice of the Peace (JP) might have been one small step for these volunteers, but it was a giant leap for the NSW community that’s benefited from their support over the past five decades,” Mr Speakman said.
A JP’s primary function is to serve as an independent witness for people making statutory declarations or affidavits and to certify copies of original documents, and people can search for one in their area at jp.nsw.gov.au.