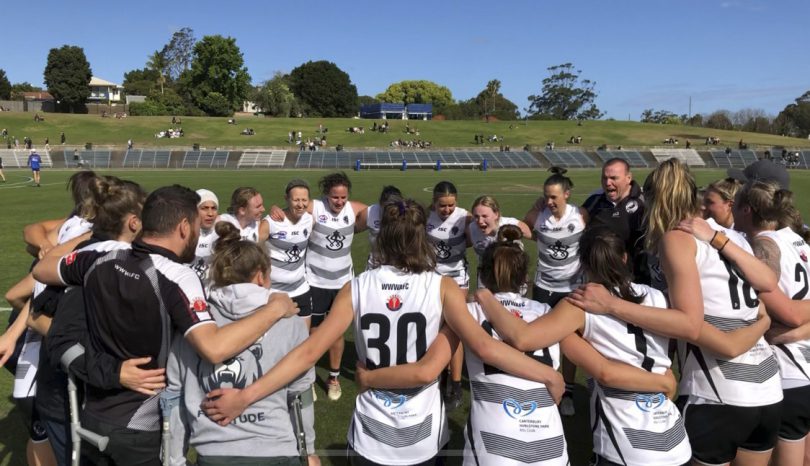 THANKS to an outstanding effort, the Inner West Magpies Women’s Premier Division team continue to progress deep into the AFL Sydney finals after winning the AFL Sydney Women’s Semi-Final against Southern Power on a fine but chilly afternoon at Henson Park on Sunday.

Southern Power flexed their muscles by beating the Magpies in the last round of the season but the team were determined to reverse that result and that they did.
The Magpies played with intensity, confidence and skill from the opening bounce to produce a second consecutive four-quarter effort.
The scene was set with Elyse Glynn dominating in the ruck, a trend that would continue for the entire match. The midfield capitalised on this dominance and provided the forwards with lots of forward 50m entries.
Rebecca Privitelli kicked three goals in a best on ground performance but was well supported by Linda Lodge and Gillian Behan.
Defence has been rock solid over the last three weeks, bolstered by Elly Jenkins inclusion, and they repelled Southern Power’s attacking moves.
The midfield were outstanding all day with good performance from Melissa Freckelton, Lael Kassem, Madeline Convery and the courageous actions of Erin Todd, who played the last half after having her front teeth damaged in a sickening collision.
Thanks must also go to Laura Marshall.
All up, it was a tremendous team effort with the Magpies atoning for their previous defeat to Southern Power.
The win also made it more special for Gillian Behan who played her 100th Game of Sydney AFL.
Inner West Magpies 4.3.27 defeated Southern Power 2.4.16.
This weekend’s Preliminary Final is at Henson Park, Marrickville, against East Coast Eagles at 1.20pm on Saturday, October 3.
Further info at innerwestmagpiesafl.com.au.