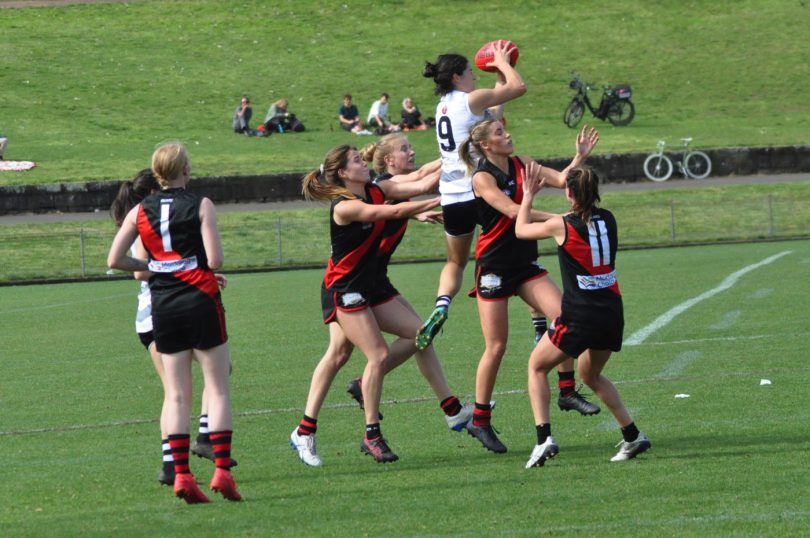 ON the back of horrific knee injuries to two star players last week, the Inner West Magpies Premier Division Women’s side were asked to dig deep in Sunday’s elimination final and show the character that has underpinned this formidable group of players.

Arriving at Henson Park to take on North Shore who are littered with talent, the Magpies delivered from the opening bounce, bringing a level of intensity and attack on the ball that set them apart from their opponents.
This level was maintained throughout the match and North Shore had no answer.
The Magpies’ midfield were brilliant all game and the backs were ever-reliable, with the forward line showing the intensity required to play finals footy.
Special mention to Elyse Glynn who rucked all day ensuring that the Magpies’ midfielders were presented with good ball.
Rebecca Privitelli was a standout with two telling goals but it was her aerial prowess which lifted the team.
Melissa Freckelton moved back into her midfield leader role and formed a strong connection with Erin Todd and Belinda Harrison.
Laura Marshall and Gillian Behan also deserve special mention.
In the end, the women showed they are in it for ultimate premiership glory.
Inner West Magpies 3.1.19 defeated North Shore 1.7.13.
Next week, they take on Southern Power who did a pretty good number on the Magpies two weeks ago.
Revenge will be sweet and the team will take the confidence from this decisive team effort into the game.
Come along and cheer on the Magpies at Henson Park, Marrickville, from 1.20 pm on Sunday, September 27.