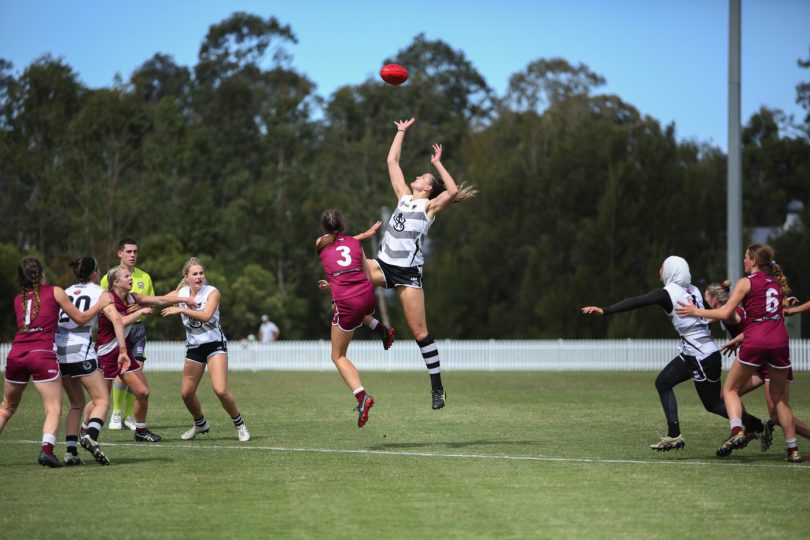 AFTER a scoreless first quarter, Manly flexed their muscles and put a stop to the Inner West Magpies Premier Division Women’s fairytale ending to the season.

HAVING come fifth on the ladder, for the Inner West Magpies Premier Division Women’s side to be playing in the Grand Final on Saturday was an outstanding achievement – but the team was hungry for more.

They played Manly, the number one side for the season, who were coming off a week’s rest courtesy of a comprehensive semi-final win.
The day was superbly draped in sunshine and all was in readiness for what would have been a total fairytale end to season 2020. The first quarter was evenly contested with both teams failing to score but in the second quarter, Manly flexed their muscles, scoring three goals to the Magpies’ one.
The Magpies’ midfield were beaten on the day but were far from disgraced.
Erin Todd and Melissa Freckelton led the way as they had all year and were hard at the contest.
The predicable matchup of two Manly players on Rebecca Privitelli proved decisive, although she deserves acclaim for her ability to contest and was rewarded with two goals of her own.
Gillian Behan was the best forward and was involved in 17 hardball acts, demonstrating her effort all game.
The Magpies’ under-siege backline was excellent and was well led by Elly Jenkins and Meredith Montgomerie, ensuring that the result was not a blowout.
Special mention must also go to Elyse Glynn.
The result was a 21-point loss but an experience the Magpies will learn from.
Inner West Magpies 4.1.25 defeated by Manly 6.10.46
For a team that had not played finals in a long time, to winning three sudden-death finals games, was amazing and one they should be very proud of.
The club will commence pre-season training in November so no matter your skill level, the Magpies would love to see more females and males looking to play AFL in their friendly and professional environment.
Further details at innerwestmagpiesafl.com.au.