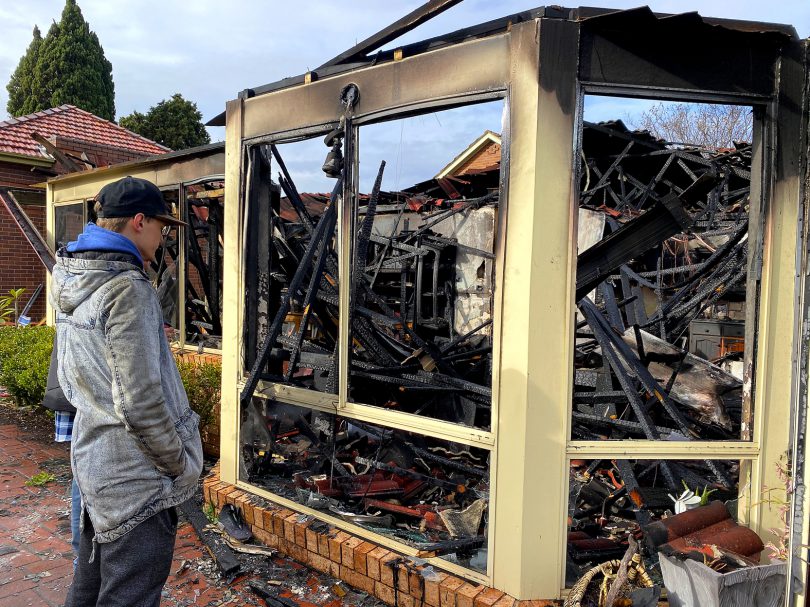 A Guildford family had a lucky escape when fire ripped through their home.

Four people and the family dog had a lucky escape after a blaze seriously damaged their Guildford home in the early hours of this morning.

Fire and Rescue NSW (FRNSW) crews were called to the Woodville Road property at 5.30am after a fire which was believed to have started in a fire pit on the back deck spread into the roof.
Darren Willis, 52, was asleep with his wife Leanne, 50, and said it was their 25-year-old son Kyle’s girlfriend Lisa, 20, who spotted the blaze on her way to the toilet and woke everyone up.
Mr Willis said while there was no smoke inside the home at that point, although detectors went off as they were leaving the house.
“I do think we were lucky really. We all got out safely,” he said.
“It was my son’s birthday, and that’s why they were using the fire pit into the early hours of the morning. They thought it was safe to leave because it was only smouldering.
“But it wasn’t anyone’s fault, it was just an accident.”
Although they managed to save some photos and a few other items, he said about 80 per cent of the house was destroyed, and insurance assessors from the NRMA estimate it will take at least a year to rebuild.
Mr Willis wanted to thank a neighbour who gave the family food and clothing, as well as the adjacent 7/11 who dropped off coffee, water and Krispy Kreme doughnuts.
“Everyone was really great,” he said.
A FRNSW spokesperson reminded the community to ensure their homes are safe that heading into winter, by checking their smoke alarm is working; keeping items at least one meter from heaters; and to making sure open fires are well ventilated and completely out before going to bed.