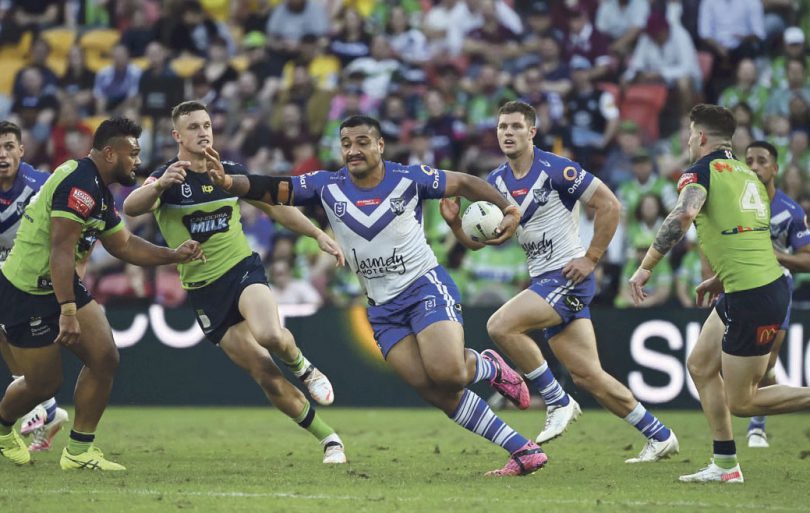 CANTERBURY Bankstown Bulldogs coach Trent Barrett says his team needs to learn how to win again after they let their lead slip to an 18-20 loss against the Canberra Raiders on Saturday.

The Bulldogs enjoyed a two-man advantage for three minutes after a Raider had been binned for a cannonball tackle on Adam Elliott and another’s shoulder rocked Tuipuloto Katoa with 19 minutes to play
Then a third was also placed on report for twisting the arm of Luke Thompson in a tackle as the Raiders appeared to be unravelling.
But they rallied and scored in the right corner and then nailed the conversion.
Dallin Watene-Zelezniak slid over the line and, two points down after the conversion, gave the Bulldogs 14 seconds to conjure a miracle that never materialised.
Hugely disappointed, Barrett said he hoped his side learnt from their errors.
“We gave away two penalties … and they created opportunities, we just couldn’t ice them at the end,” he said.
“We should have won but we weren’t good enough or composed enough to do it; it’s very disappointing as that was a chance for us.”
When asked about the new contact ruling, Barrett didn’t hold back.
“It’s a contact sport,” he said.
“It’s hard not to touch anyone’s head or neck when you’re tackling; there’s no thuggery in the game, no flying arms or elbows, no one does it intentionally. We’re all aware of it. [If they keep making changes] it will turn into a game of Oztag.
“Who knows where it will end up?”
The Bulldogs take on the Titans this Saturday from 3pm at Cbus Super Stadium on the Gold Coast.