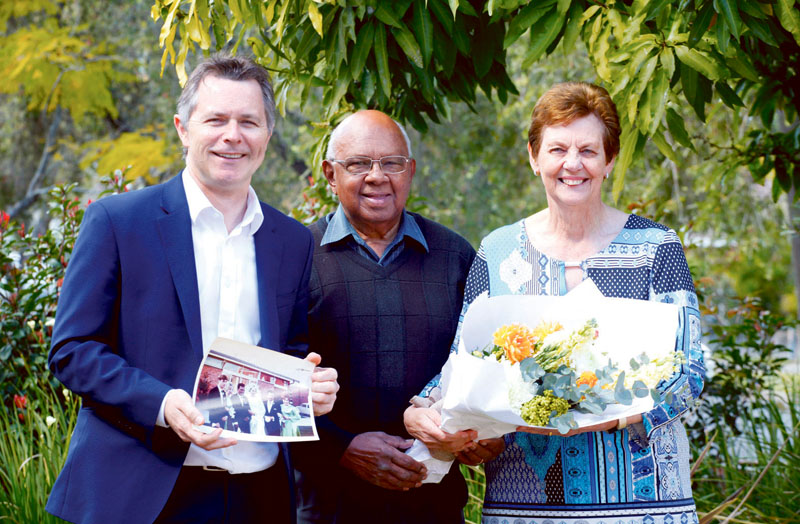 CHESTER Hill couple Uncle Harry and Bev Allie had a visit from Blaxland MP Jason Clare who congratulated them on their 50th wedding anniversary.

The couple met when they were both serving in the Air Force – Bev was clerk mustering and Harry was supply mustering.
Married on August 23, 1969, at Wesley Church in Sale, Victoria, they moved to Bankstown in the late ‘80s and have become an integral part of the Bankstown community.
After his discharge, Harry worked in the Defence industry for 11 years, before joining the Commonwealth Public Service. He was employed by the Aboriginal and Torres Strait islander Commission, Dept of Immigration, and then with Dept of Families Housing and Community Services and Indigenous Affairs in the Sydney Indigenous Coordination Centre until he retired in July 2010.

The Bankstown Hospital committee member now works to improve the opportunities not only of other Aboriginal and Torres Strait Islander people, but to all who may not have had the opportunity to achieve their full potential.
Mr Clare said: “Fifty years being married to the love of your life is such a wonderful thing. May we all be so lucky.
“It was a privilege to be able to pop in and join in the celebrations with Harry and Bev at their home in Chester Hill.”
Mr Clare invites residents to let his office know when they are celebrating a 90th plus birthday or a 50th plus wedding anniversary so he can arrange for personal congratulatory messages.