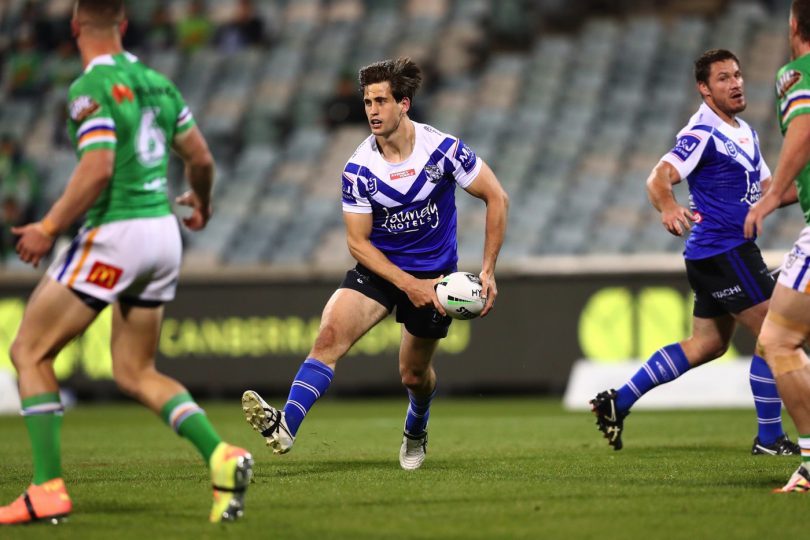 Lachlan Lewis will start in the halves for Good Friday’s clash with South Sydney at Stadium Australia (4pm).

Lewis has been rewarded after a strong performance in last week’s Mounties victory over Canberra in the NSW Cup.
With the Bulldogs having eight players out through suspension or injury, the team has been selected from a group of 21 available players.
Suspensions to Dallin Watene-Zelezniak, Luke Thompson and Josh Jackson, in addition to injuries to Ray Faitala-Mariner (12-16 weeks), Jeremy Marshall-King (6-8 weeks), Jayden Okunbor (16 weeks), Christian Crichton (season ending), Ava Seumanufagai (3 weeks) and Jake Averillo (ankle) have created selection headaches for Trent Barrett, although Averillo has been named in the extended squad.
The team changes from last week’s match against Brisbane will mean Lewis comes into the halves for Averillo for his first NRL match of the season; Nick Meaney swaps places with Corey Allan to start at full back with Allan on the wing; Sione Katoa comes into the starting side as hooker for the injured Marshall-King; Renouf Atoni moves from the bench to replace the suspended Josh Jackson; and Development squad utility Jackson Topine and Dean Britt were both named on an extended bench with a final decision on the starting 17 to be made on Thursday.
The full squad is :
1 Nick Meaney
2 Corey Allan
3 Will Hopoate
4 Nick Cotric
5 Tui Katoa
6 Lachlan Lewis
7 Kyle Flanagan
8 Dylan Napa
9 Sione Katoa
10 Jack Hetherington
11 Adam Elliott
12 Corey Waddell
13 Renouf Atoni