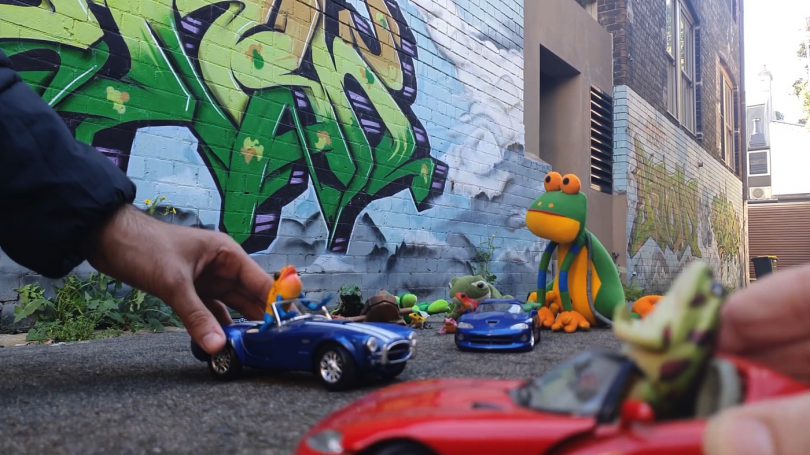 AUSTRALIA’S own international hit film festival, The SmartFone Flick Fest, is back for its sixth year with entries open until August 1.
Already around 150 entries have been received from over 30 countries, including from local resident Glen Falkenstein’s entry, ‘The Frog and the Furious’.
And this year, the popular festival that has attracted thousands of entries worldwide since its inception – all shot and edited on phones or tablets – adds a special SF3 ISO category to its popular smartphone shorts, SF3 Kids, feature films and 360/VR (Virtual Reality) sections.

Glen’s film is an affectionate parody of ‘The Fast and the Furious’ films.
“It was our (along with friend Sid Batshon) first chance to film all year,” he said.
“We only had access to the house, street and my collection of frogs and toy cars but we’re pleased with the result and had so much fun creating it.
“This is an amazing opportunity for experienced film-makers as well as beginners and I hope my westie amphibians do well.”
The SF3 ISO (Isolation) films must be three minutes or less and shot within local lockdown laws.
Festival co-directors and founders Ali Crew and Angela Blake said they wanted to create a category “to reflect the unique times we’re living in and inspire even more people to tell their stories through film”.
To mark this year’s launch, SF3 will host an exclusive online premiere screening of last year’s winner of the SF3 2019 Best Feature Film, ‘Blue Moon’.
To enter and view trailers and links, visit sf3.com.au.