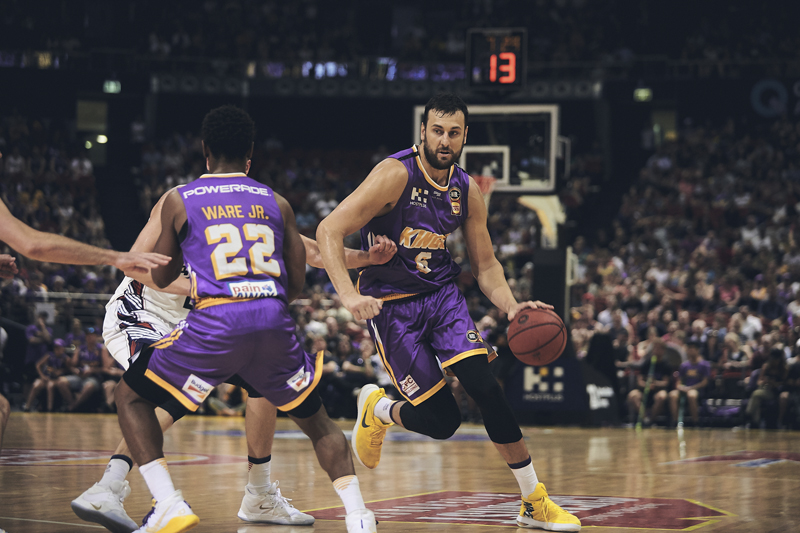 Last year’s NBL Most Valuable Player (MVP) Andrew Bogut says he won’t be returning to the Sydney Kings for the coming season.

IT’S hard to imagine but the Sydney Kings are set to start of the NBL season in October without 2019 NBL Most Valuable Player (MVP) Andrew Bogut.
While not officially announcing his retirement, the 35-year-old told his fans via his Twitter account that he had “decided not to sign with the Sydney Kings, or any professional sporting team for that matter for the time being”.
“This by no means is a retirement note, but simply saying any concrete decisions are too hard to be made at this point in time,” he said.
Bogut said the timing behind his decision was to enable the Kings to move forward with their free agency plans which opens on July 1.
“The reason I have decided to do this now is to give the Sydney Kings enough notice to act accordingly with free agency being around the corner,” he said.
“I have enjoyed being home with the family and learning more about my kids than I ever could have previously.
“My body is enjoying the break after playing basketball for 19 straight months and I hope to be back out on the basketball court in the near future.
“The plan moving forward? Spending time with my wife and kids, slowly getting back into physical shape, and finally making the most out of time we don’t traditionally get at home.”
His two-year stint with the Kings ended in disappointment when Covid-19 restrictions cut the end of 2019-20 season short while they were trailing the Perth Wildcats 2-1 in the best-of-five finals series, leaving them as runners-up.
At the time Bogut was scathing about the NBL’s “mishandling” of their response to the health crisis.