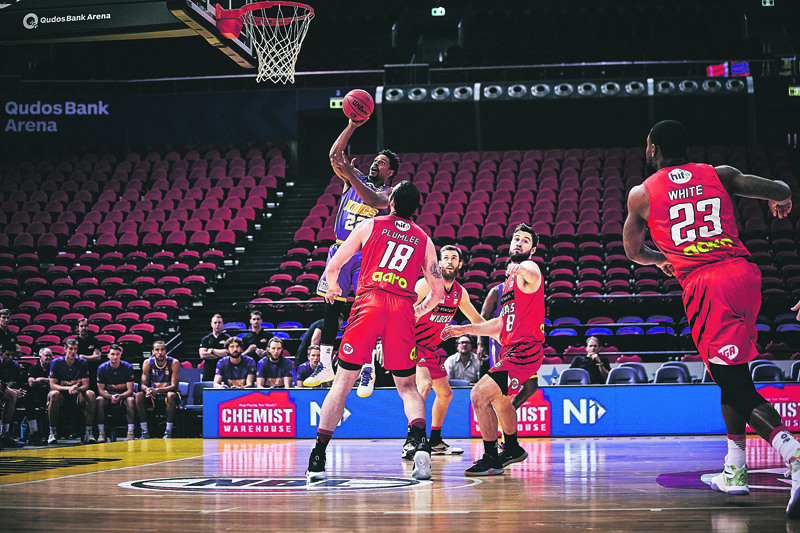 But no ‘courtiers’ to cheer them on

PLAYED in front of empty stands, the second and third games of the NBL’s grand final series were no less intense for the lack of a live audience.
The decision to proceed without fans has been made in light of increased concern over the transmission of COVID-19.
The Kings levelled the best of five final series in the second game in Perth on Friday with an impressive 97-83 win against the Wildcats.
Leading for all but two minutes in a gutsy effort on the road under unprecedented circumstances, the Kings played hard responding to every charge by the home-side.
Once again, Andrew Bogut was superb for Sydney, recording another double double as he finished with 19 points and 13 rebounds. He also received plenty of support from Jae’Sean Tate who scored 20 points of his own and Kings captain Kevin Lisch also on 19 points.
Sunday’s third game in the series was no less intense although this time it was the Wildcats who came out on top with a 111-96 win over Sydney.
Scoring 19 points and five rebounds, Brad Newley was on fire, going five of six from the field for 16 points in the first half, backed up by the Kings MVP Tate who again led the way with 20 points, six rebounds, while Lisch scored a solid 16 points. The Wildcats managed to hold off a Sydney team that never stopped fighting but now finds itself in a backs-to-the-wall situation heading into game four back in Perth on Friday.