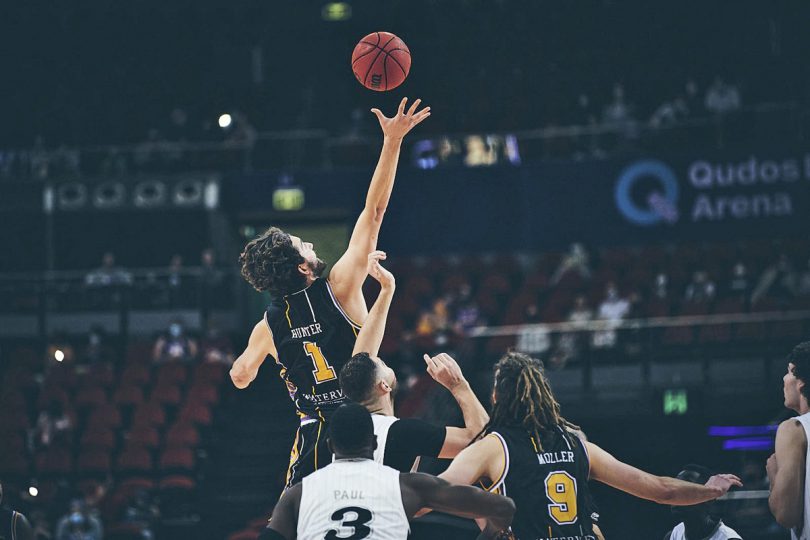 A DEFIANT late fightback was not enough to keep the Brydens Lawyers Sydney Kings from opening their NBL22 campaign with a hard-fought 79-74 victory over defending champions Melbourne United on Sunday afternoon at Qudos Bank Arena.

With just three members of their championship-winning team on court, United struggled offensively against a enthusiastic Sydney side who led by as much as 21 points in the third quarter and looked to be cruising to a comfortable win before United got in some timely baskets, putting the big opening night crowd of 8,632 at the Q on the edge of their seats.
When Sydney import floor leader Jaylen Adams (15 points, nine rebounds, three assists, three steals) missed a triple with 11 seconds left, United had a chance to send the game into overtime.
Fortunately for the Kings, Adams grabbed the rebound, and with United forced into a quick fouling situation, the Kings got the ball to Shaun Bruce, who calmly nailed a pair of clutch free throws that sent Sydney to their seventh straight home over United.
“It wasn’t the prettiest offensive game by any stretch, but I was pleased with the way our guys came out and competed,” a relieved Kings Head Coach Chase Buford said.
“We guarded from the opening tip pretty well; we rebounded the ball well which we wanted to do.
“Again, the offence will get better, but I’m proud of our guys. They gutted it out and found a way to get it done.”
Kings face another blockbuster confrontation in Round Two, with the Illawarra Hawks and Brian Goorjian coming into Qudos Bank Arena this Saturday night. Tickets are available via Ticketek.