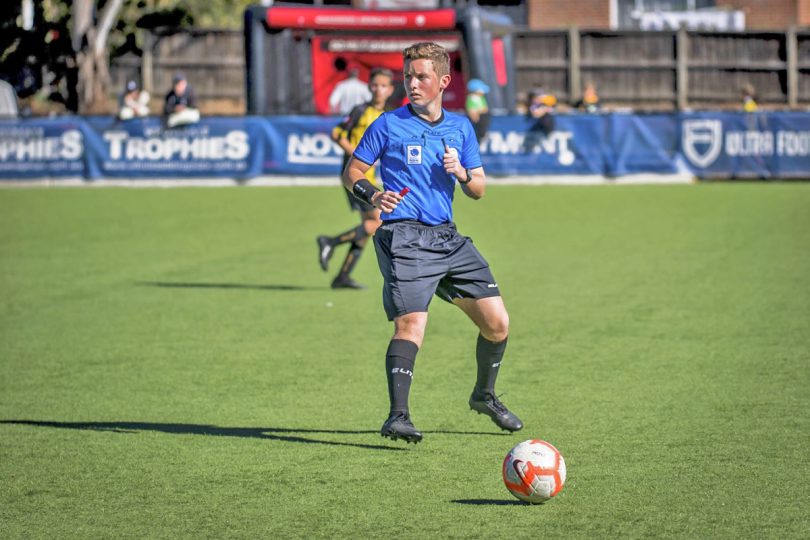 HAVE you ever considered grabbing a jersey, badge and whistle and taking charge of a game of soccer?

Refereeing can be a fun experience and it’s a great way to stay involved in the game.
It’s also fantastic exercise and will keep you in shape; you get to run around outside, enjoy exciting games and make a few dollars – junior referees at Granville District Football Referees Association (GDFRA) make between $1,000 to $1,500 a season.
Refereeing puts you right in the action and gives you a part in the game that you’ll never get as a spectator.
It’s a decision that was made by James Makris who became a referee at 16 and has never looked back.
“I personally stopped playing to put all my effort into refereeing once I had been identified as someone who had potential,” he said.
“I wanted to give it a proper go and it was too hard to play and referee with clashes at certain game times but that being said, many of our referees still play and referee with no problem. We cover games on Friday nights, all day Saturday and all day Sunday as well as a few midweek games.”
He says refereeing allows him to engage in the sport to a new depth.
“Refereeing allows me to express myself and also to be able to meet a wide range of new people while doing so,” he said.
“Refereeing is a good way to keep fit and get paid for it; I’ve also played with people who were shy and after refereeing for a while, have come out of their shell and grown into strong, confident people.”
GDFRA is presently recruiting males and females aged over 13 to become involved in refereeing.
For info, email James at tscchair@gdfra.org.au or register for the next Granville District Referees course at playfootball.com.au/referee.