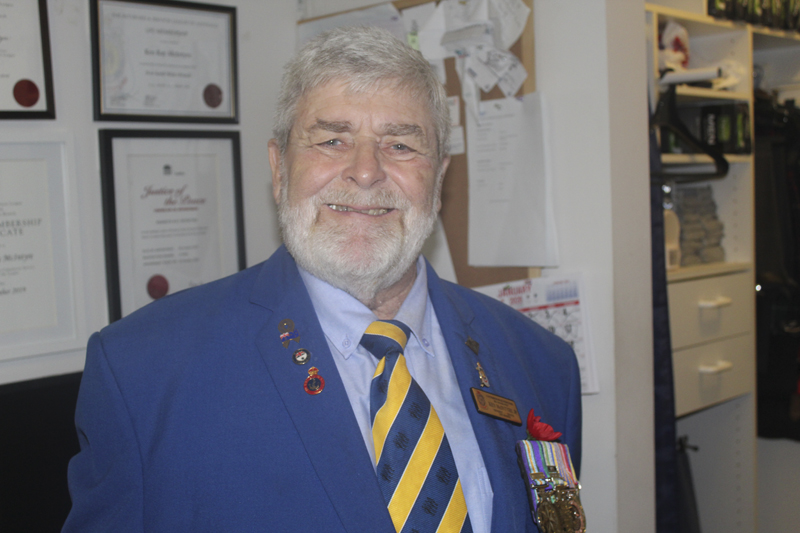 LIFE Member of the Canterbury Hurlstone Park RSL Sub-Branch and president since 2017, Kenneth Ray McIntyre, 73, is still in shock after being awarded a Medal of the Order of Australia (OAM) for service to veterans and their families.
“I’m over the moon at receiving the OAM,” he said.
“I work full-time in a voluntary capacity because I enjoy it and get so much out of it; I don’t do it for any reward but it is nice to have the recognition.”
A volunteer for nearly 40 years after serving 20 years in the Australian Navy which he joined at just 15, Kenneth juggles many roles yet still finds time to visit local veterans.
“I find the 90-year-olds very inspiring; I love their company and hearing their stories and most of them have a great attitude and are going well,” he added.
“It’s an honour to be part of their lives and assist them however I can.”
Some of Mr McIntyre’s roles include Patron, Women’s Auxiliary since 2017; Hospital Visitation Officer since 2014; Chair, Welfare and Benevolent Committee since 2013; Coordinator, ANZAC Day and Remembrance Day Services since 2013; Honorary Secretary, 2012-2016; Pensions Officer since 2012; Far Southern District Council and State Congress Delegate since 2012; Welfare Officer since 2012; Honorary Trustee since 2012; Honorary Assistant Secretary, 2011-2012; Chair, Membership Committee since 2011; Recruiting Officer since 2011; and Patron/sub advisor of the Youth Club, 2017.
He was also a junior basketball, rugby league and swimming coach as well as a former Scout Leader and has been a Justice of the Peace since 2015.