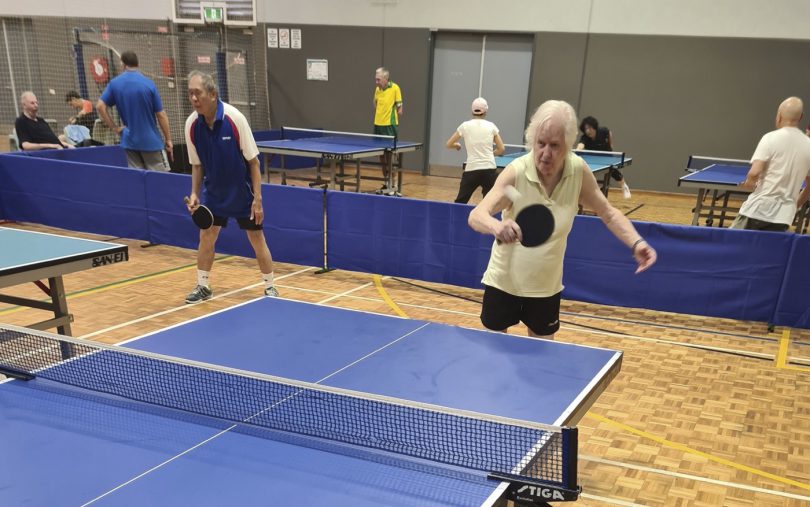 A SPORT for all ages, table tennis requires zero strength or power to play.

Especially good for seniors, it increases concentration and alertness, stimulates brain function, helps with the development of tactical thinking skills, boosts hand/eye coordination and provides aerobic exercise, keeping the heart strong.
Also, you get the benefits of socialising, it is cheap, there’s no age gap and you can play it alone should you wish.
Padstow resident Gillian Hutchinson, 88, plays three times a week in the Table Tennis Veterans Grade competition in the indoor sports centre at Sydney Olympic Park.
“We play women against men as well as younger people,” she said.
“Last Sunday our team played against a 27-year-old player who just made it into the competition because the age limit used to be 30.
“On Tuesday nights we play men against women as well as boys and girls as young as eight.
“One of the nine-year-old boys has been training for a year in China and we have to put up with very fast serves and even faster returns.”
Gillian says table tennis is a great for all of the family and even better for older people as they develop quick reflexes and don’t have to cover a lot of ground as players do in tennis.
“We include disabled players in our team as well as wheelchair doubles,” she said.
“It’s a game you can play socially too at any time.”
It’s also on offer at Sydney Table Tennis at Padstow Park Public School on Saturdays, Bankstown PCYC, Belmore PCYC and Bankstown Baptist Church.
For further info, call Table Tennis NSW vice president Ted Davis on 8736 1266.