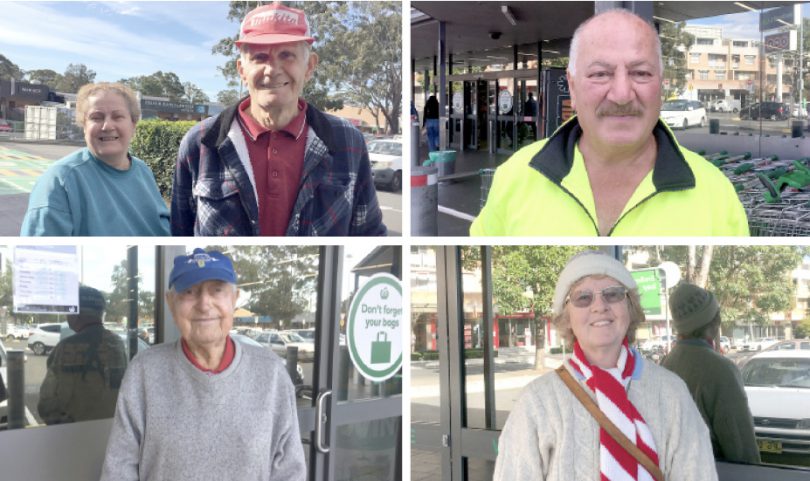 MORE than half of older Australians believe some positives have emerged from the coronavirus outbreak despite the restrictions and changes it has caused, according to new research by the Global Centre for Modern Ageing (GCMA).

The national survey found that although many older people face significant challenges – including limited contact with their grandchildren – they also feel there has been improved community spirit, with people being more neighbourly.
Many Revesby shoppers the Torch spoke with are relieved the worst of Covid-19 appears to be over but are very concerned about the new cluster cases in NSW and in Victoria.
Revesby’s Joseph and Laudy Tarabay, in their 70s, said they missed their grandchildren but are now seeing them again, with their daughter helping out with groceries when she could.
“We basically just stayed home and now we are well stocked up,” Mrs Tarabay said.
“We are very worried about the people flying in from other countries still.”
Hany Shbo, 61, who is the trolley manager at Revesby Woolworths, just kept working, confident he would be okay.
“There are bigger problems; more needs to be done to represent seniors at a government level,” he said.
“I feel like we pay tax for nothing and I am against all of the government handouts.”
Panania’s Judy Greentree, 83, says she still popped down to the shops during lockdown.
“I just keep my distance and even before this, washed my hands a lot; I’m always very careful,” she said.
Padstow’s Anne Barton, 67, says life hasn’t changed that much.
“I have missed my cinema and theatre trips but that’s about all; though I am talking more regularly to my neighbour, we have been supporting each other.”
Panania’s Geoffrey Hardy, 93, mostly stayed at home.
“My daughter came down once a week and I’d just go to the bank and occasionally the shops,” he said.
Picnic Point’s Bev Dowers, 83, and neighbour Jo Smith took it in turns to shop and sometimes, shopped together.
“It was a struggle,” Jo said, “I had to come to Woolies three times a day for a while just to get there first after the truck delivery.
“You couldn’t get toilet paper, rice, pasta, flour or sugar.”
“We didn’t have sugar for nine days.”