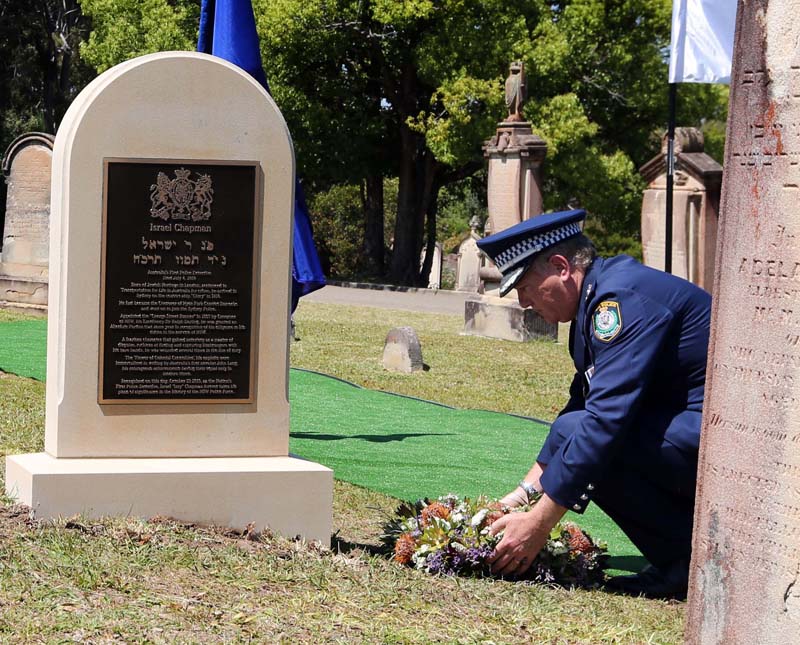 THE NSW Police Force has honoured our nation’s first detective during a memorial service, more than 190 years after his designation.

In 2018, the NSW Police Force Detectives Board engaged a research team from the Rookwood Historical Cemetery, NSW State Archives and NSW State Library, to assist State Crime Command to identify NSW’s first detective designation.
Their research uncovered the colourful exploits of former convict Israel “Izzy” Chapman, which includes his policing career in NSW and the nation’s first designated detective, as appointed by then Governor of NSW, Sir Ralph Darling.
The group also replicated his pardon and the first fictional novel published in Australia – ‘The Adventures of George Flower: the Celebrated Detective Officer’ – which honours the deeds of Detective Chapman.
It was also discovered Detective Chapman was laid to rest in an unmarked grave at Rookwood.
Further research identified his descendants who became involved in the project.
With funding from the Jewish Board of Directors and Police Association, researchers and Detective Chapman’s family made arrangements for a headstone to honour his contribution to law enforcement.
NSW Police Commissioner Mick Fuller joined the Chapman family to place the headstone on his grave at Rookwood Ceremony on October 24.
Commissioner Fuller says Detective Chapman’s legacy lives on in modern criminal investigation.
“NSW has a proud history of criminal investigation, the names on our Detectives Honour Roll show that, and Detective Chapman’s story shows these skills have been helping protect our community for almost 200 years,” he said.