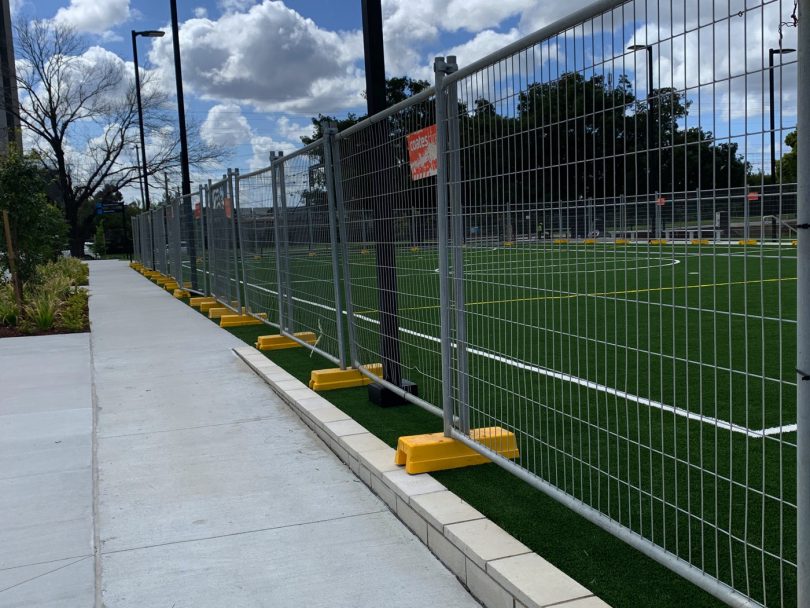 JUST a day after the new Granville Centre was officially opened, temporary fences were placed around the outdoor soccer field.

Councillor Joe Rahme said the outside, synthetic ‘small court’ was not designated as a “bookable space” which was a lost revenue opportunity for the council.
He said that while he was happy to leave the adjoining basketball court as an open area, there was also a need to closely manage the more expensive synthetic surface of the soccer court.
“It has become apparent that there is interest in allowing community groups and private hirers to book this space for recreational use, and as a training facility for smaller teams of younger children,” he said.
“This is a state-of-the-art facility and synthetic turf and I think turning it into a bookable space that’s available to everyone, just provides more of a systematic approach and allows people that have booked it to use it properly and will avoid a lot of conflict.”
Questioning why it wasn’t already a bookable space, Crs Lisa Lake and Glenn Elmore unsuccessfully tried to have the issue deferred to get a more detailed report, while Cr Ola Hamad also queried how much fencing off the soccer court would cost.
Under the proposed fees, Cumberland residents using the court Monday to Friday, will pay $12 an hour between 9am-5pm and $15 an hour from 5-8pm, or $20 an hour on weekends. The charge for non-residents on weekdays is $15 an hour between 9am-5pm and $20 an hour from 5-8pm; and $30 an hour on weekends.