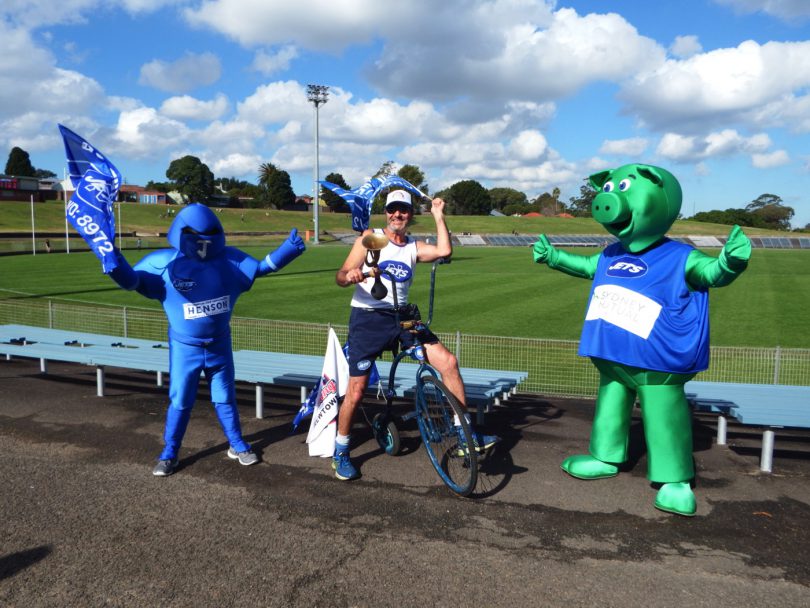 WITH his blue and white flags fluttering, Newtown Jets supporter and Dulwich Hill resident John Trad takes off on a mini penny-farthing for his lap of the Henson Park Oval which he has been doing for eight years, every time the Jets score.

This year, however, is different as the Jets are not playing but John has been out there every Saturday for the past five weeks, and will keep going until the NRL grand final day, to raise money for his beloved club.
Involved with the Jets for 20 years after turning up as the sole video cameraman in 2000, John launched ‘Laps with Trady’, which has so far raised $2,500, to help keep the Jets flying.
“It’s important for us supporters to keep raising funds otherwise the club might not survive,” he said.
“Other clubs have first grade to support them but our feeder club, Cronulla Sharks, has limited funds.
“So every Saturday, I’ve been cycling for the full 80 minutes the Jets would normally play, and have been getting sponsorship of 50 cents or $1 a lap; I can do 32 laps in that time.
“A guy said to me if I could do 35 laps in 80 minutes, he would donate $100 so I went really hard and rose to the challenge.
“We can’t advertise yet for people to come to Henson Park but when we can, we are planning to have more fundraisers such as Beer, Food & Footy days, Diversity days, Hipster days and Family Fun days.”
To make a donation, look for him on Facebook.