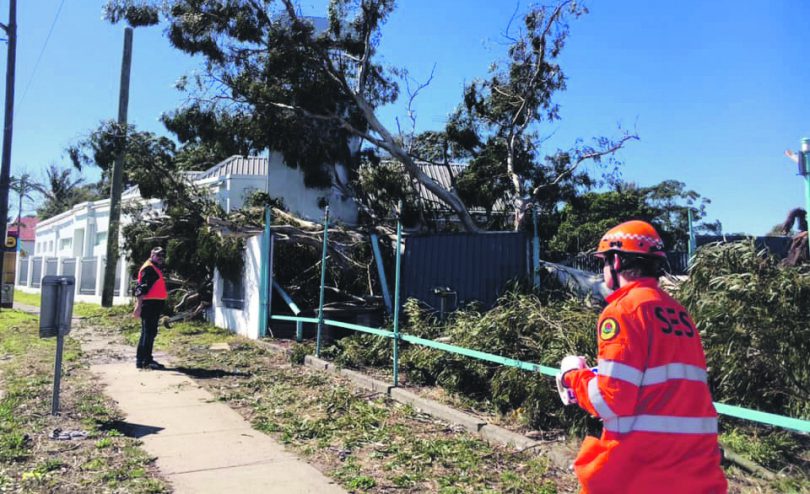 The Bureau of Meteorology (BOM) issued gale wind warnings for large parts of Sydney as cold fronts moved across much of the State over late Friday into Saturday, and again on Monday night.
The Canterbury SES Unit responded to more than 30 calls by Saturday, including one job which required some help from a local crane company to safely clear a large fallen tree.
Bankstown SES unit commander David Niven said they’d also called in a crane operator to deal with a large tree in “an awkward position” on Fairford Road at Padstow on Tuesday morning.

He said Bankstown SES received 85 calls for assistance between Friday and Saturday alone, particularly in relation to uprooted trees and roof damage, with Panania the worst impacted area.
“We had multiple Bankstown crews in the field and we were also assisted by SES volunteers from the Strathfield, Canterbury, Auburn and Ashfield-Leichhardt units,” Mr Niven said.
“We would remind residents to do what they can to prepare themselves ahead of forecast bad weather, including moving vehicles under cover where possible and away from trees, as well as securing and putting away loose items from around your house, yard or balcony.

“Residents should also stay well clear of downed power lines or objects that may be energised, such as fences, and keep at least eight metres away.”
Report fallen power lines to Ausgrid (131 388), Endeavour Energy (131 003), Essential Energy (132 080) or Evoenergy (131 093) as shown on your power bill.
For assistance during storms, call the NSW SES on 132 500 or if the situation is life threatening, call Triple Zero (000).