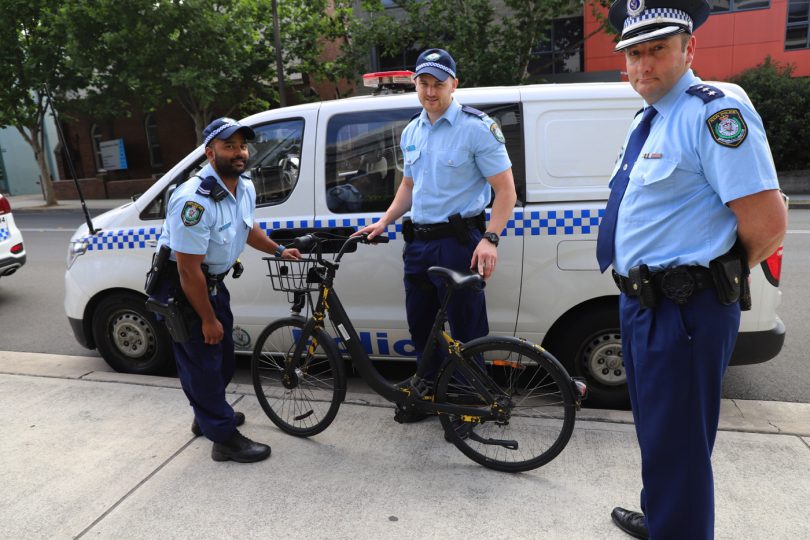 A SPIKE in bike thefts has prompted a warning from police.

HOPEFUL they can reunite this recovered bike with its as yet unidentified owner, are Senior Constable Darren Goonewardene and Constable Adam Neaves with Detective Inspector Karl Leis at Auburn Police Station.
Two storage cages at Wentworth Point unit blocks, have been targeted in the past week alone and commander of Auburn Police, Superintendent Adam Johnson, urged residents to photograph their bikes and to record the make, model and serial number to help investigators.

“If you do that and your bike does happen to get stolen, we take those details and there’s a much better chance that it will be identified and returned to you,” he said.

He said police also wanted to speak with three teenagers, all described as Caucasian males with slim builds and wearing black clothing, who may have information in relation to an ongoing investigation into bikes thefts.

“I’d like to take this opportunity to remind the public to make sure they leave their bicycles locked and secured, and if possible, out of public view,” he said.

“If you see something, say something. We rely on the public to report suspicious behaviour, and we also rely on people reporting any property that has been stolen so we can investigate appropriately.

“Any information as to the identity of the offenders responsible for recent thefts can be reported anonymously if people wish to Crime Stoppers on 1800 333 000.”