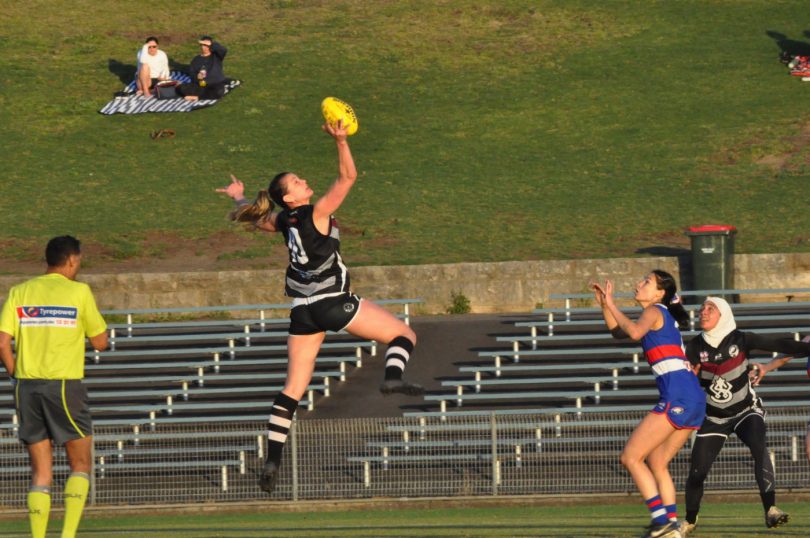 THE lights were burning brightly at Henson Park as the Inner West Magpies took on the UNSW Eastern Suburbs Bulldogs in the Premier Division Women’s game on Saturday.

The Magpies were coming off the back of a shock loss and were asked to reflect and then fix the deficiencies which they did well.
In the end it was an emphatic victory, with the Magpies running away with a 91-point thumping.
A couple of structural changes to the Magpies’ setup and a tough week on the track coupled with some honest and tough individual assessment, were all that was required to fix the previous week’s play.
The backline has been solid all year and were merciless as they repelled every attack by the Bulldogs, to keep them scoreless.
Magpies’ midfield showed their full talent with an outstanding game from all while Elyse Glynn gave them first use by winning every ruck contest in what was her best game for the club.
The Magpies’ forward line is loaded with talent but has not been working efficiently, however the Bulldogs felt the full brunt of them clicking.
Overall, it was superb team effort and one that will build the confidences heading into the last round and then the finals.
Inner West Magpies 12.19.91 defeated UNSW Eastern Suburbs Bulldogs 0.0.0.
Best Players: E Sherrin, R Privitelli, L Kassem, J Smith, E Heads and E Glynn.
In the Premier Division Men’s game, the Magpies battled valiantly for all four quarters but were no match for the Bulldogs who ran out 90-point winners.
Inner West Magpies 5.7.37 defeated by UNSW Eastern Suburbs Bulldogs 19.13.127.
Best Players: J Zoppo, R Price, P Wilmot, S Stephens, B Klemke and J Robinson.
Details of Inner West Magpies Round 9 games this Saturday are innerwestmagpiesafl.com.au.