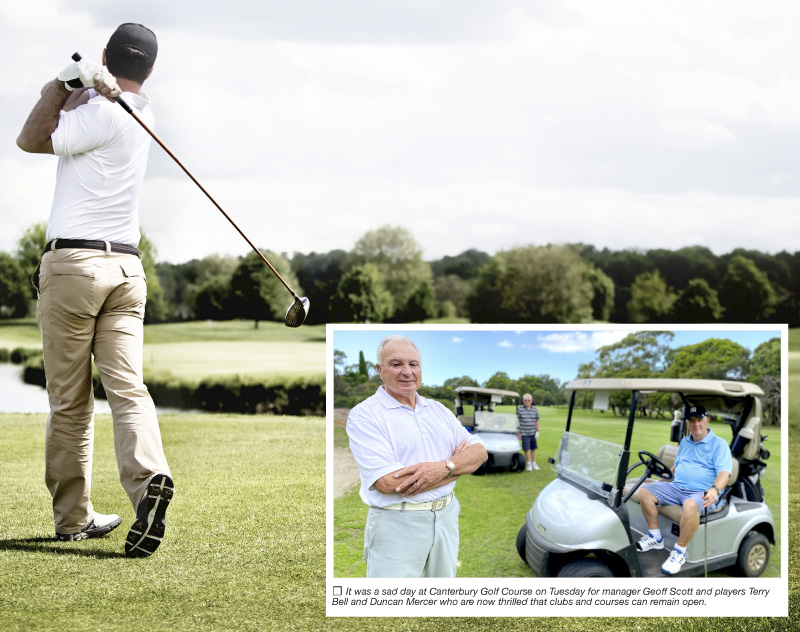 GOLFERS everywhere are rejoicing, including at Canterbury Golf Course, with the Government’s latest backflip on the sport ensuring that courses can now stay open so long as social distancing measures are enforced.

Prime Minister Scott Morrison had announced on Sunday night that outdoor gatherings were restricted to no more than two people.
Australians, particularly those aged over 70, had also been told to stay home where possible.
While people are allowed to leave the house for exercise, indoor and outdoor gyms have been closed and personal training has now been limited.
“While golf is used as exercise for many, it was clear golf did not fall within those parameters in the past 24 hours,” a Golf Australia statement said on Monday.
“All golf clubs and facilities have been advised to close until further notice.”
Rightly devastated, Canterbury Golf Course’s Geoff Scott said on Tuesday it was a blow, considering they were making every effort to stay safe and all players were being very supportive.
“All social groups were cancelled but we had members playing in two-person groups,” he said.
Canterbury Golf Course manager Shane Wieck said they were delighted with the change of heart by the Government and were expecting to re-open on Thursday.
“It’s wonderful that commonsense has prevailed,” he said.
“We are just waiting to get the go ahead from Canterbury Bankstown Council and of course, games will be limited to two players to meet the social distancing requirements.”
Golf Australia reported nearly 400,000 playing members around the country in its 2018-19 annual report.
Of those, 80 per cent were males with an average age of 56 years.
The average of Australian golf clubs’ female members is 64.