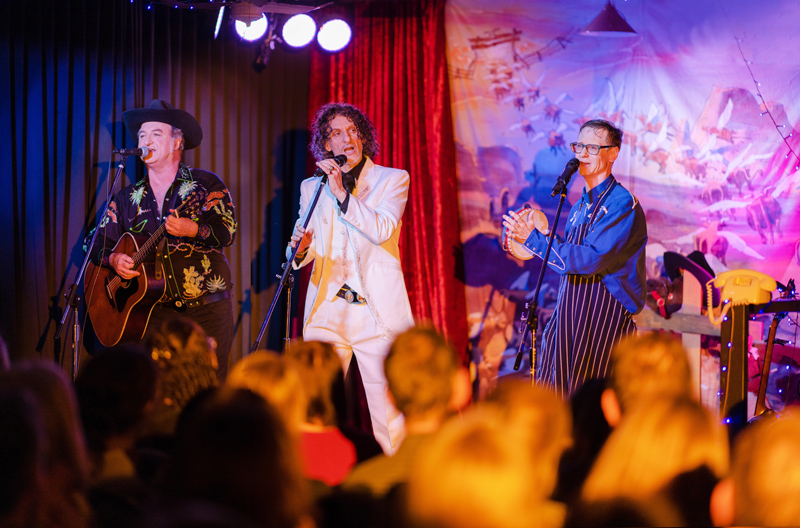 IT’S soon Christmas and Gods Cowboys, including Belmore’s John Knowles, are holding surprise parties for Jesus later this month and early next.

After their triumphant sold-out reunion shows in February, Gods Cowboys are back in their hilarious new show, ‘Slouching Towards Bethlehem’.
John, along with the other Cowboys, Geoge Catsi and David Delves, were much loved satirists from Sydney’s thriving comedy and cabaret scene of the mid 90s.
With politicians playing out black comedy (also known as ‘government’) on the world stage, it seemed the perfect time to step back into the spurs for some good old fashioned moral redemption.
John said: “We all come from a religious background but are no longer religious and enjoy making fun of the dogma of organised religion.
“In the show, it’s all through the eyes of cowboy preachers; it’s part comedy, part slapstick.
“The last time we played, the room was packed and everyone was laughing so hard, we had to stop a few times and let the laughs peter out before we could continue.
“I’m sure these next shows will be just as memorable.”
Join the Cowboys when they saddle up for a comedic musical tour de force riding rough shod over the rocky religious terrain and shiny corporate bauble that is Christmas.
God’s Cowboys have been reborn again in time for the rapture.
Carol Wimmer, from Sydney Art’s Guide, is definitely part of the recaptured herd: “Gods Cowboys have arisen! And what a resurrection … their brand of wicked parody and caustic satire is even more ‘now’ than it may have been ‘then’.”
Catch the shows on Saturdays, November 30 and December 7 from 7.30pm at Petersham RSL, 77 Brighton Street, Petersham.
Tickets: thepbc.org.au, eventbrite.com.au or at the door, $20-$30.