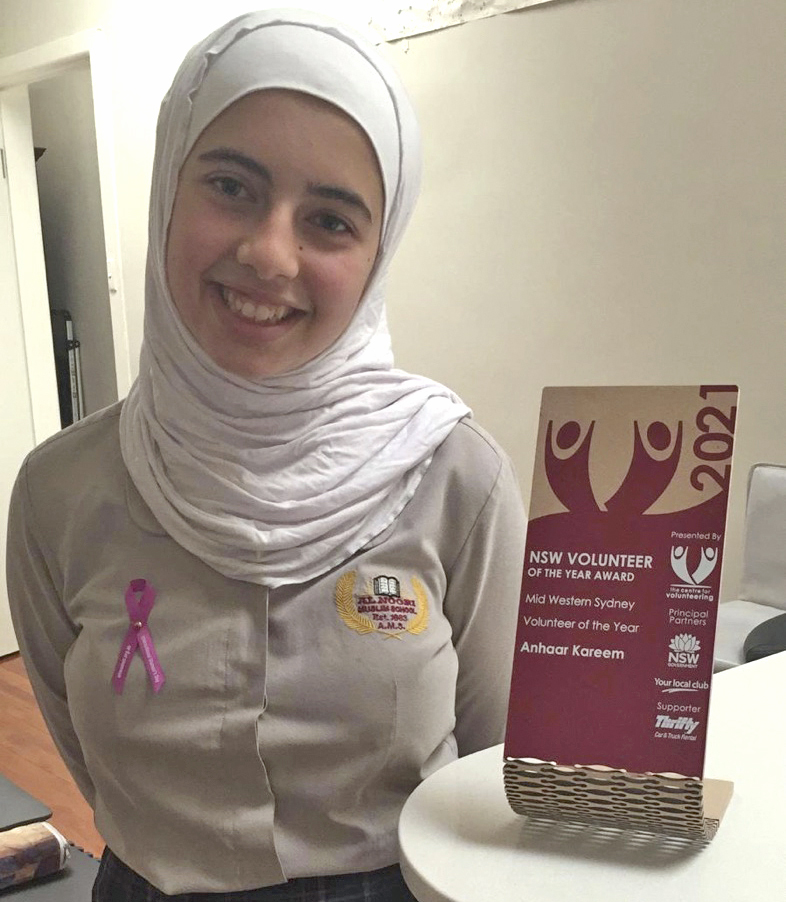 SHE’S only 14 but Greenacre student Anhaar Kareem already has a prestigious State essay win under her belt and has now been named Youth Volunteer of The Year and the overall Volunteer of the Year for the Mid Western Sydney Region by the Centre of Volunteering.

Inspired by her grandmother Abla Kadous who founded IWWA (Islamic Women’s Welfare Association) in Lakemba in 2000, Anhaar volunteers on weekends, after school and in the school holidays.
She beat 4,000 other students from across Australia by winning the What Matters? Essay contest in 2017 when she was only 10 and is keen to devote all of her spare time to the service of others.
Attending Alnoori Muslim School, the Year 9 student has been making ‘yellow strawberry’ earrings for charity and selling them on Instagram, raising $300 for Australian Indigenous campaign, ‘Change the Record’, $600 for the Gaza’s Children’s Fund and has just launched her own R U OK? initiative to raise further funds.
Anhaar also mentors 10 girls aged eight to 11 years, meeting up with them fortnightly to discuss issues such as bullying, good relationships and mental health.
She said she was pleasantly surprised to receive recognition but regarded all of the volunteers as winners.
“Contributing to social justice and advocating for others is important to the community, however, it is also so rewarding,” she said.
“My goal is to help those in need and make any kind of small difference to the lives of others.”
The overall State winners of the Volunteer of the Year Awards will be announced in December.