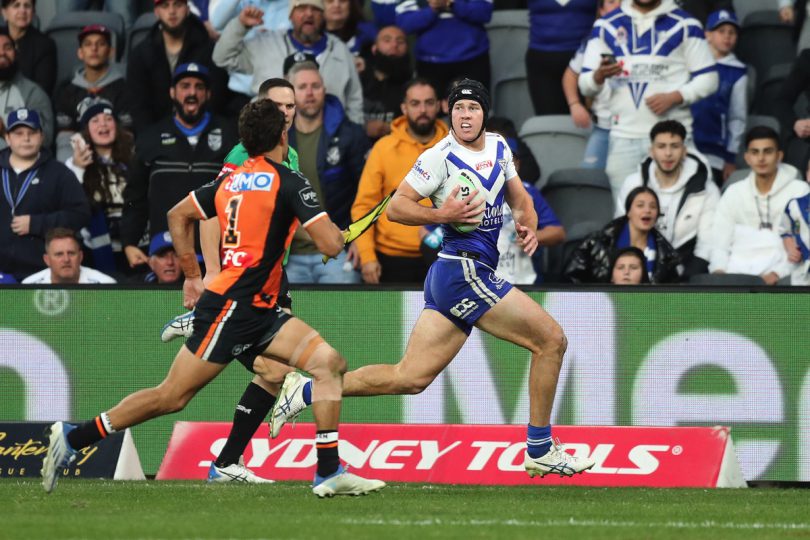 CANTERBURY has romped home with a 36-12 win over Tigers on Sunday, enjoying back to back wins in a season for the first time since 2019.

A double to Jake Averillo set up the result as the Bulldogs backed up last week’s sterling effort against the Eels to produce five converted tries in the win.
Departing Bulldogs hooker Jeremy Marshall-King got the Bulldogs on the board in the 14th minute with his fourth try of the season.
NSW Origin hopefuls Matt Burton and Josh Addo-Carr were at their best in front of Blues coach Brad Fittler and it’s paid off for Burton who makes his Origin debut this Sunday in Perth.
The Bulldogs held a 12-6 lead at half-time before Interim Coach Mick Potter’s men unleashed with four tries in 18 minutes to set up a comfortable 30-point lead.
Canterbury enjoyed 63 per cent possession for the match while they completed at 83 per cent for the match.
Potter said the players worked really hard to make their attack better and every week were coming up with something different.
“They’ve realised there’s more in them and they want to play a little bit more and I think they’re just expanding and they’re trying a few things and it’s working for us,” he said.
“I’m really happy for them and to have that that many points in a couple of games … it’s great for everyone.
“We’re not getting carried away with ourselves but winning solves a lot of problems and makes everyone at the club feel really good.”
The Bulldogs next take on the Sharks on Saturday, July 2, from 3pm at CommBank Stadium.