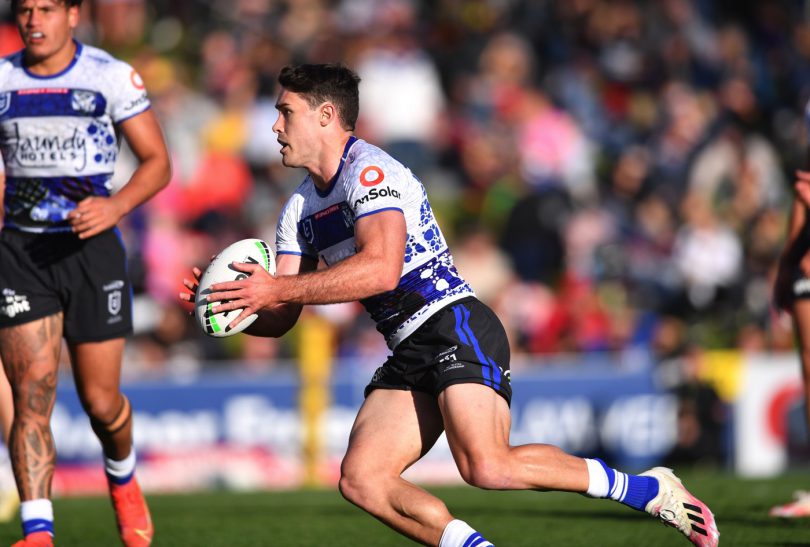 THE Canterbury Bankstown Bulldogs put in a mighty effort to keep the competition leaders almost scoreless in the first half but ultimately went down 30-4 to the Penrith Panthers at BlueBet Stadium on Saturday in the NRL’s Indigenous Round.
Only hours away from the announcement of the NSW team for Origin I, up to nine Panthers were expected to enhance their chances and reputations in the first-versus-last clash.
But the NRL pacesetters could only muster a 10-0 lead for almost an hour, before putting on the afterburners scoring four tries in the final 24 minutes, with the Bulldogs showing plenty of fire to keep them at bay.

Playing his first match since completing a five-game suspension for a high shot, Jack Hetherington gave away a set restart sadly and was twice pinged for high tackles
However Bulldogs Coach Trent Barrett said they could come away with plenty of positives.
“I thought the first half was really good,” he said.
“We went there with a plan and it worked but letting them get the try before half-time hurt.
“But they’re a really good team and we can be proud of our efforts.
“There are some real lessons there though for our younger players and some of our older players too.
“Our team can never be beaten on effort but we need to learn that to beat those sorts of teams, we have to be clinical for [the full] 80 minutes.”
The Bulldogs have a bye in Round 13 and next take on the Dragons on Monday, June 14, from 4pm at Stadium Australia.