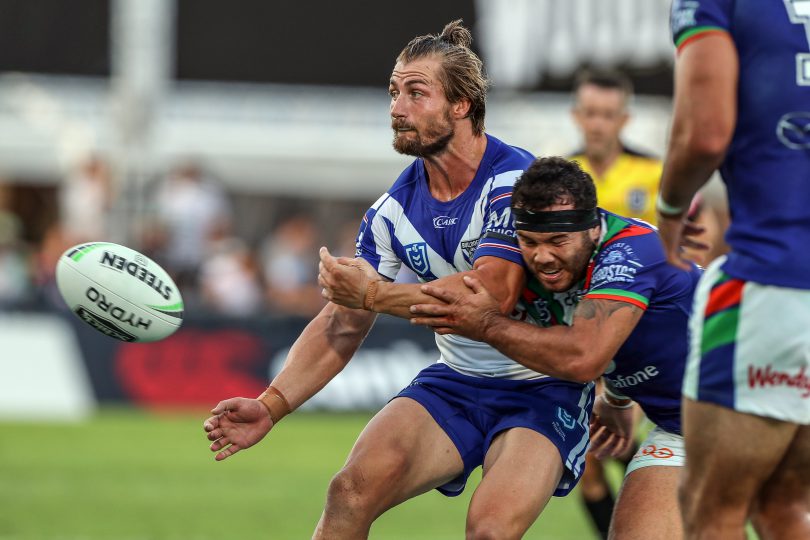 Kieran Foran will return from injury to play his 200th NRL game this Monday against the Dragons.

EXPECTED to put more bark back into the team, Bulldogs playmaker Kieran Foran will return from injury to play his 200th NRL game this Monday against the Dragons at Bankwest Stadium from 4pm.
Foran has recovered from the shoulder injury he sustained while playing for New Zealand against Great Britain last November.
Coach Dean Pay said Foran’s return would lift the players.
“Just that experience he brings is going to help,” he said after the Bulldogs disappointing 32-6 loss against Manly Sea Eagles in the final game of round three on Sunday.
Manly opened the scoring in the third minute and the Bulldogs were down to 16 men when Adam Elliott left the field in the 12th minute following injury.
They increased their lead to eight 10 minutes later, with a third try in the 35th minute, taking the score to 14-0.
After the break, Manly added a fourth try and then two in three minutes in the middle of the second half, giving them a 28-0 lead.
Canterbury lost another player to injury when centre Reimis Smith left the field with under 15 minutes to go.
Then the Dogs grabbed their first four pointer of the night and Jake Averillo scored the first try of his career when he collected a chip kick from Lachlan Lewis and ran 30 metres to score under the post.
Manly hit back four minutes later, giving the Sea Eagles a 32-6 lead and the win.
After the game, Pay added: “We seem to be a bit lost, a bit frantic with what we’re doing, and that causes errors.
“There’s no excuse, we all need to do a better job.”