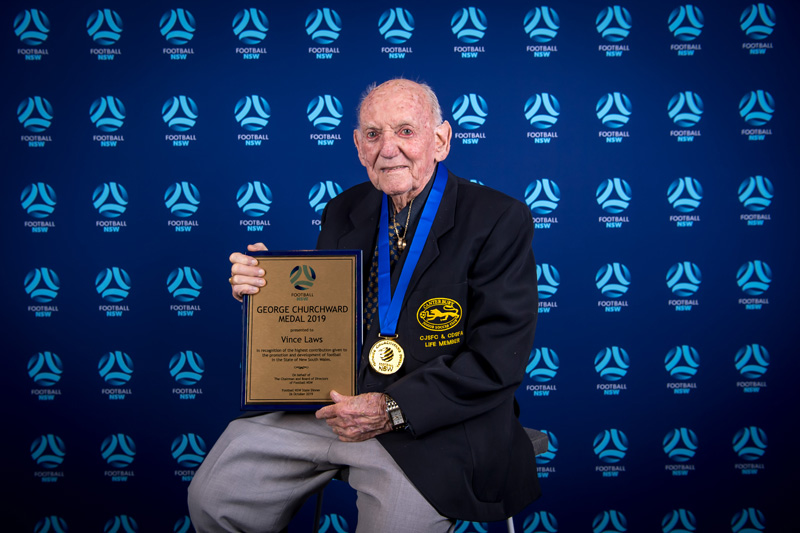 The night’s final and most honoured award, the George Churchward Medal is presented annually to an individual who has exemplified an outstanding commitment to the sport.
The 2019 season marked the 79th year of Vince’s involvement in football.
He started playing at the age of 11 with the Lilyfield Wanderers Club in the Canterbury Association and eventually played football for the Pyrmont Club in the old NSW Association.
In 1964, he registered his son with the Canterbury Junior Soccer Club and was persuaded to coach a team in the Under 9 competition. He accepted the request to coach thinking he would do so for one year. How wrong he was, as he continued to coach teams with the Canterbury Club for 33 consecutive years. He also did a stint of five years with the APIA Club during this same period.
He and his wife Val spent many years working behind the scenes at the club.
In recognition of the contribution he and his late wife had made to their club and more broadly to the Canterbury & District Soccer Football Association, it inaugurated the Vince and Val Laws Medal in 2013, which is presented annually at the Association’s Volunteer Recognition Dinner.
At 90 years of age, Vince feels he may have a couple of more years left in him to continue assisting the Canterbury Junior Soccer Club from time to time.
Other locals to be awarded on the night included Bankstown District Soccer Football Canterbury & District Soccer Football Association’s Anthony D’Agruma, who started playing within Canterbury and District Soccer Football Association 44 years ago, was also recognised for his tireless efforts and service to football in their local community.