THE Auburn Eagles were rampant in first grade but have some tough work on day two, next week, to win in the other grades against the Epping Bulls in the Sydney Shires cricket competition. 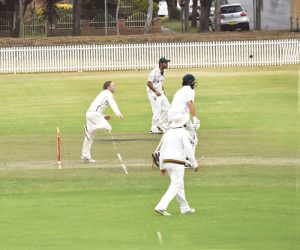 The Eagles still sit atop the Club Championship ladder.
Epping won the toss and batted first and soon regretted the decision eventually succumbing for only 130 runs; well short of the par of 265 on George Parry Oval.
Returning to form, Tom ‘Tommygun’ Wood was rampant once again taking 5-47 to sap Epping’s spirit. Yasir ‘Yas’ Ali supported with 3-27, switching to spin after opening with pace.
In reply, the Eagles were 3-139, taking the 6 points for a first innings win letting them try for an outright win next Saturday.
The second grade Eagles have Epping all out 195, with Najeeb Azzimi taking 7-54.
The North Epping Oval is a “road” where anything less than 300 runs is too little, so the Eagles should be front runners.
Back at Mona’s David Tribolet Oval, Epping were all out for 171 with Dan Gauci 2-31, Simon Zammit 2-31 and Aaron Hadley 2-40. At stumps, Eagle Marlon Meurling was 37 not out and the score 0-58.
The Eagles third grade are nicely set up for a first innings win and perhaps an outright.
Fourth grade let Epping get away with 8(dec)-286. At stumps the Eagles were 0-33 and need to bat safely to ensure the six points for a first innings win.
The Frank Gray side set the target at 7-259 at the close of 50 overs. In reply, the Rabbitos were well shy of the target at 6-215 after 50 overs. Aaron Hadley took 2-51 and Bilal Mohammad 3-39 took wickets but no Eagles bowlers leaked runs.
It is a club representative competition where each club nominates its best players under 24 years of age regardless of grade. The competition is split into two geographic divisions with the Eagles on top of their division this year.