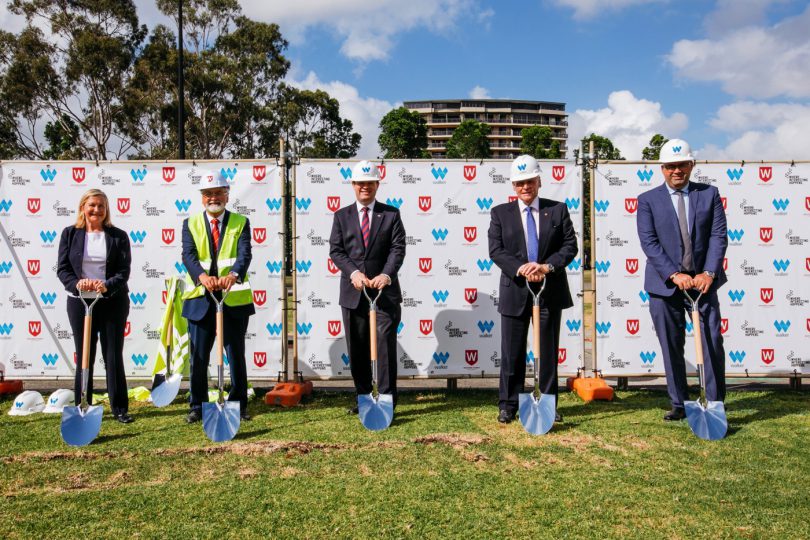 WESTERN Sydney University’s newest vertical city campus in the Bankstown CBD is only two years away with the first sods turned on the site on Monday.
The University has partnered with Walker Corporation to deliver its $340 million Bankstown City campus, which is expected to create 675 direct and indirect jobs during construction.
Minister for Jobs, Investment, Tourism and Western Sydney, Stuart Ayres, was present for the ceremonial ground breaking for the campus, which will have capacity for up to 10,000 students and 1,000 staff when it opens in the second half of 2022.
Some of the key campus features will include: Health, advanced manufacturing and education focused research programs; courses in teacher education, psychology, arts and humanities, business, accounting, IT and non-clinical health areas; teaching, research, conference and social spaces; informal learning areas and indoor and outdoor terraces; and easy access to the future Bankstown Metro station.
Walker Corporation Executive Chairman, Lang Walker AO, said this project would help revitalise Bankstown’s CBD into a thriving, vibrant and well-connected town centre.
“When the campus is complete and fully activated, it will deliver about $140 million a year in additional economic uplift to the Canterbury-Bankstown economy and the wider region,” he said.
Mayor Khal Asfour said the University would completely transform Bankstown’s CBD.
“Such a development is a massive win, not only for Canterbury-Bankstown but Western Sydney,” he said.
“It will inject millions of dollars into the local economy every year, creating more local jobs, and further supporting Canterbury-Bankstown’s status as an education and health precinct.”
Some of the building’s sustainability features include the capture and re-use of rainwater, as well as innovative thermal and lighting systems and solar roof panels.