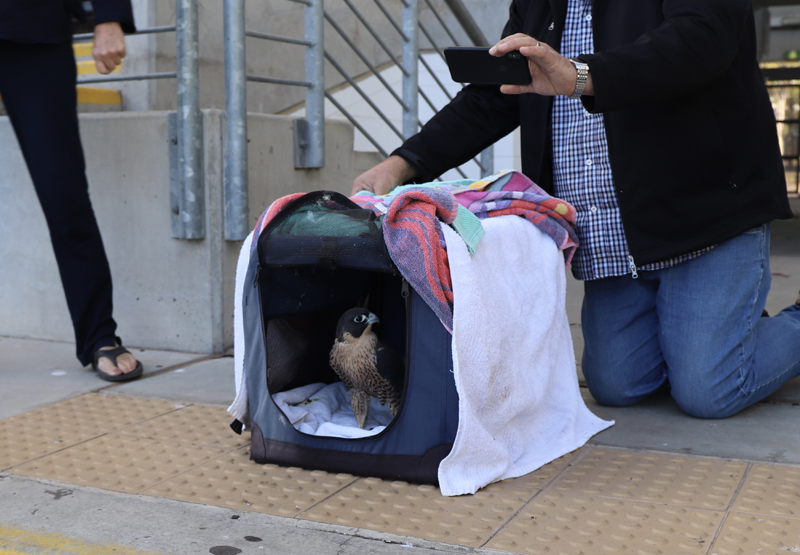 FIREFIGHTERS joined wildlife volunteers to rescue a young peregrine falcon after she was injured and trapped on a wall at ANZ Stadium last month.

The fledgling, nicknamed Frankie, was spotted hanging upside-down with her left foot stuck in some mesh by a Stadium staff member on Tuesday, November 5.
The Stadium’s general manager of asset management, Simon Davies, rang wildlife rescue organisation WIRES and Fire and Rescue NSW (FRNSW) to help free the bird which is part of a family of the raptors which have been living above the southern scoreboard for a number of years.
A 10m scissor lift was used to retrieve the young falcon, who was not exactly happy about the process, before she was taken to the Avian Reptile and Exotic Pet Hospital and found to have suffered nerve damage in her foot.
Rob Crawford, the WIRES volunteer who nursed Frankie back to health, said it could have been a life-ending injury but thanks to some intensive rehabilitation, she was safely returned home just two weeks later.
Within seconds of her release, her parents swooped in to greet her with loud screeches.
“Peregrine Falcons are very protective of their young and will happily go back to feeding her and teaching her how to hunt,” Mr Crawford said.