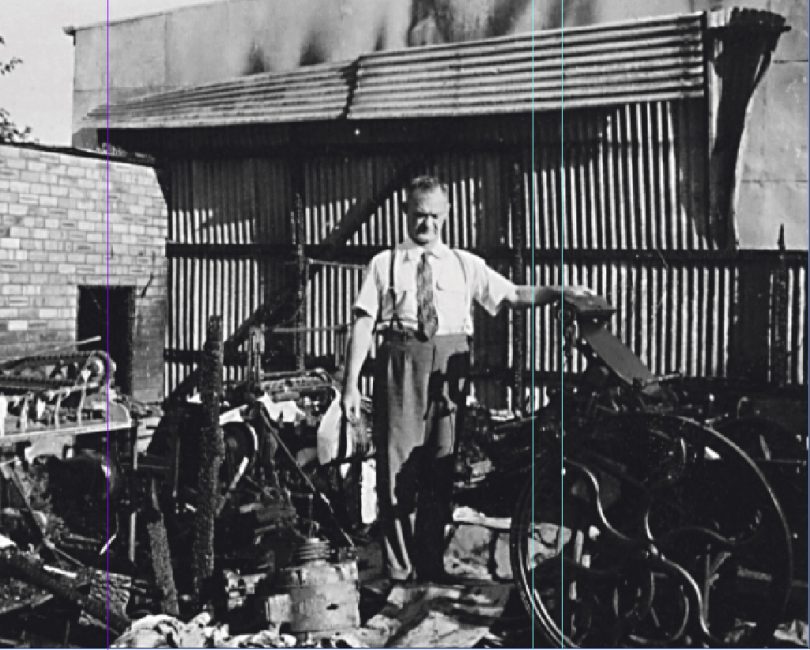 Dudley Engisch with the original press which has survived until today is a stark reminder of the explosion that ripped through the Torch office in 1955.

SOCIETY is vastly different from early last century, with technology taking us to the moon and back and part and parcel of everyday life but some priorities never change.

The first edition of the Torch in 1920, featured advertisements from three real estate agents – then called auctioneer and house and land agents, two grocers, a pharmacist, general store, a pedigree fruit tree seller and a lime and cement merchant.
One advertisement reads: “Don’t kill your wife with work, buy Richard’s fresh fried fish.”
There is a notice promoting a ‘benefit concert’ for the Soldiers Settlement School of Arts with another small item reading: “Would the person who found a grey woollen scarf at Empire Picture Show on Wednesday, June 2, kindly return same to Mr Hays, Refreshment Shop. Soldier’s souvenir.”
On offer at Empire Theatre and Majestic Pictures, four films reviews are also featured and take up a generous amount of space revealing that readers were always keen on their entertainment pursuits.
Since that time, Bankstown has seen many dramatic social, political and economic changes but for 100 years, residents have depended on the Torch for their local news, and they have not been let down.
Les would be proud of his legacy and of his descendants who not only embraced his dream but ran with it.