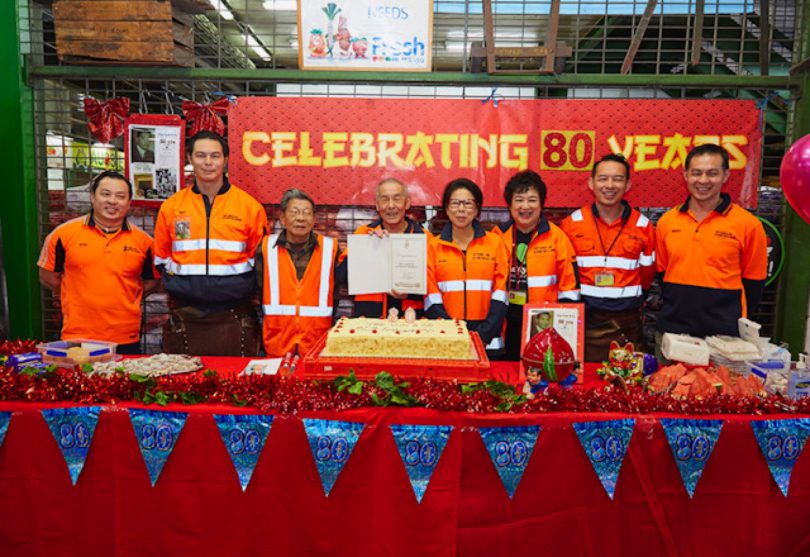 DESCRIBED as a ‘stock exchange for fruit and veg’, Yep Lum & Co – owned by the Yip family – has just celebrated eight decades of business and is still going strong at Flemington Markets.

Trudi Yip knows the secret to success.
“I’ve seen this business grow, thrive and change but we’ve kept one thing going, our customer service is key,” she said
“And we are here six days a week.”
Trudi, 49, is among the third generation of workers selling hard vegetables, including ginger, garlic, pumpkins, onions and potatoes, at the family business started by Henry Lum Yip in 1940.
He arrived in Sydney on the ship SS Victoria in 1921, sponsored by his uncle who already had a produce store in Hay Street.
Henry was 37 when he opened Yep Lum & Co – so named since the name Yip was already taken – a produce merchant store selling potatoes, onions and pumpkins.
Six of Henry’s eight children were born above his Haymarket store, including Neuman, who works alongside Trudi at the store today and turns 84 this year.
He still starts work at 2am, as he always has done, every day except Sunday.
Roger, Trudi’s Dad, 77, starts at 11pm and works a 12-hour shift.
Neuman’s wife Eileen, 74, also works at the market store along with their four sons – Darren, Randall, Glennon and Matthew, Henry’s grandchildren.
With more people cooking at home during the pandemic, the family has adapted its business model, with 60 per cent of their supplies now going to independent supermarkets rather than restaurants.
Trudi said the celebration to mark their 80th on September 4 was very special with the ‘Dads’ presented with a certificate of service from Parliament House.
“I would like to see it reach 100 years in my lifetime, so let’s see how we go,” she added.