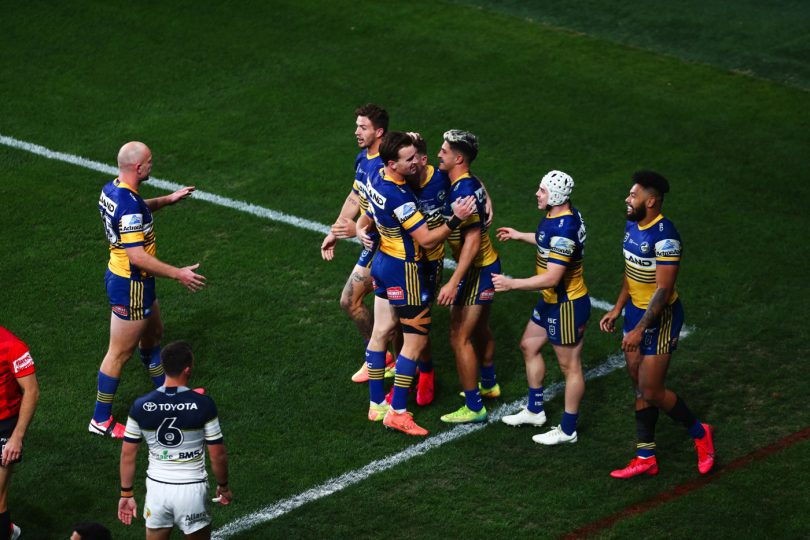 FANS were given plenty of reasons to celebrate as the Parramatta Eels scored a comprehensive 42-4 win against the North Queensland Cowboys at Bankwest Stadium on Friday night.

Mitchell Moses might have been missing from the Eels lineup but skipper Clint Gutherson had a game to remember in his 100th NRL appearance, even if it took him eight seasons to get there.
The fullback, who has had more than a few injury woes in his career, racked up three try assists and booted seven goals from eight attempts, most of those from the sideline and won plenty of praise from coach Brad Arthur after the game.
“Before Mitch came, Gutho did a bit of kicking and he wasn’t too bad, he kicked them pretty straight,” Arthur said.
“He has a bad cork from last week’s game and he didn’t do any kicking practice this week because he couldn’t, so that just shows the type of bloke he is. I offered to rest him up a bit this week, but no, he wasn’t interested.”
Winger Maika Sivo also showed what he is made of, becoming the first Eel since Semi Radradra,to score four tries in a game, while five-eighth Dylan Brown played with plenty of confidence to assist in three tries of his own and Jai Field made a speedy and impressive debut.
Arthur also praised the improvement in Sivo’s game.
“He’s going well, he just had to work on some of his timing and depth there and put himself in a better position to give some of those guys inside him an opportunity to make those passes to him,” he said.