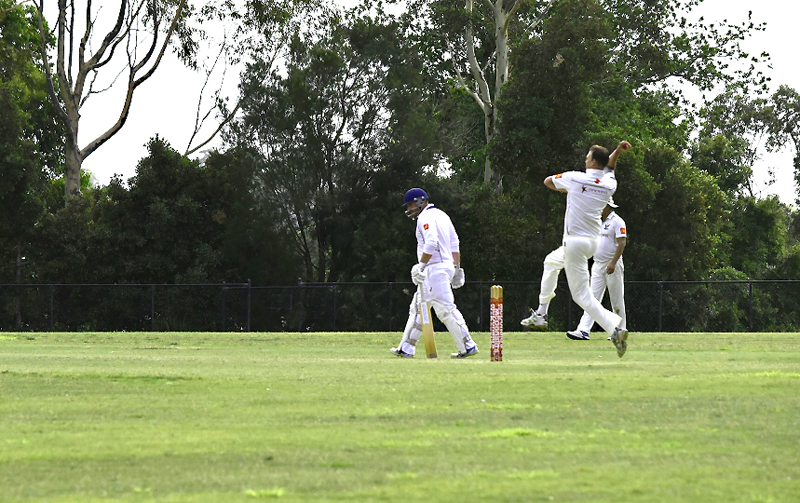 Around the grounds, Auburn should win the matches in all grades, cementing their lead on the Club Championship ladder.
First grade captain Ardil Domingo, won the toss and seeing a green deck and cloud cover sent Roseville in to bat. The Roseville Chase deck was a road and Roseville got to 280 all out. M. Y. Ali starred after switching from pace to off-spin, taking 5-62 aided by Mark Bursa’s 4-53.
At stumps, Auburn were 1-57 after opener Jarryd ‘Flash’ Gordon tried leaving the second last ball of the day only to see it hit his stumps.
In second grade, Martin Azzimi chose to bat and scored 40 with his brother Najib Azzimi 23, Muhammad Ali, 20 but the star was Zubair Jadoon with 80 runs. At stumps the team is 7-244.
Third grade dominated Roseville’s bowling with that stunning 9(dec)-409. Marlon Meurling struck 102, supported by Josh Romero, 23, Adam Young, 62, Udesha Suraweera, 63, Raj Randhawa, 65 and captain Mo Dewji, 23. Next week, they’ll want to get them out and send them in again to see if an outright win is possible.
Eagle Punjan Trivedi took 5-16 to bench Roseville for only 148. In reply, Auburn were 4-48 and should get the six points providing they bat well next week.
In the season launch, in the Frank Gray Under 24 match on Sunday against Burwood, the Auburn Eagles passed Burwood’s 188 with a nail-biting 9-190. Harrison Quinn, 47 and Armajot Singh, 41, scored the main runs and wickets were shared around.
The Eagles’ Over 40 Master team, seeking a hat trick of Premierships, bowled Lindfield out for 79 and gained the win 1-83.