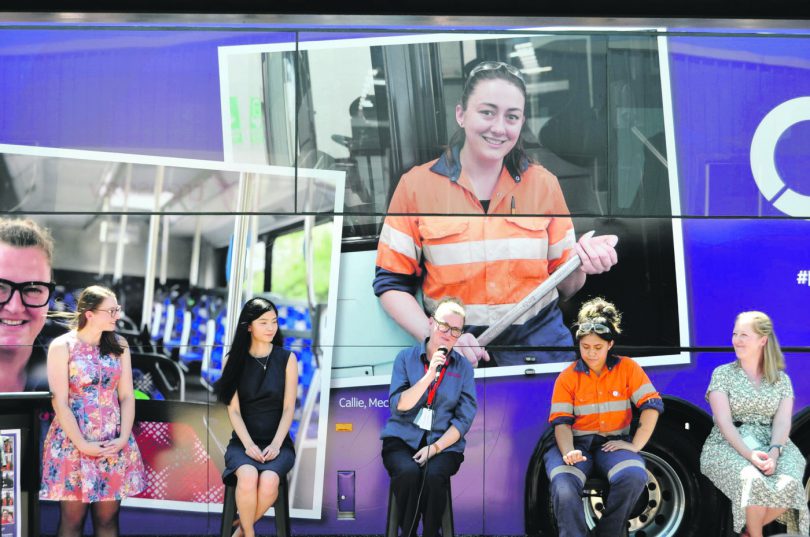 THE launch of a branded coach to mark International Women’s Day, is helping Transdev drive home its message of equality and celebrate women in the workplace.

On a journey which began over 100 years ago and having recruited 76 female drivers and five maintenance staff in the last four years alone, Transdev is on a mission to recruit more women and forge an inclusive workplace.
“International Women’s Day, celebrated globally on March 8, is about equality and celebrating the social, economic and cultural achievements of women across the world,” Transdev Managing Director Robert Macey said.
“Today we launch our ‘Women in Transport’ initiative to create working mother, friendly driver and workshop rosters; improve on road amenities for women; create women’s groups to boost engagement; and work with women’s charities.”
Helping spread the message about equality in the workplace are employees Fenella Davidson and Callie Milne whose photos appear on the bus.
A driver at Menai Depot since November, Ms Davidson came to public transport through Transdev’s car-licence upgrade program after a career in the corporate world.
When Ms Davidson first started she was given lots of split shifts and as a mum of 10-year-old, it meant she wasn’t seeing her son much but the company quickly amended that situation.
Ms Milne quit nursing at 25 to follow her dream of becoming a mechanic and is now a fourth-year heavy vehicle mechanic apprentice with Transdev.
“I am hopeful that with our targeted approach, we can continue to boost female numbers; be they in the workshops or depots, supporting the communities we serve,” Mr Macey said.