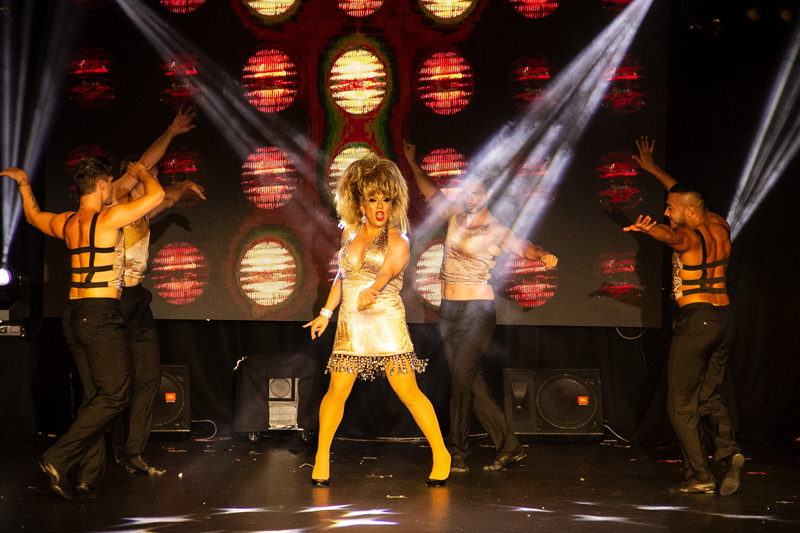 Les Divas will see Cher (aka Prada Clutch) opening her show on the Las Vegas strip; inviting some of her most famous diva friends to help celebrate including Barbra Streisand, Shirley Bassey, Tina Turner, Mariah Carey, Beyoncé, Whitney Houston, Celine Dion and Diana Ross.
The 90-minute, all-male revue will take audiences down memory lane to relive their greatest hits including If I Could Turn Back Time, Get the Party Started, Proud Mary, I Will Always Love You and I’m Coming Out.
Featuring a cast of seven, Les Divas is choreographed by Stephen Clarke who has worked with renowned divas including Kylie and Dannii Minogue, Cyndi Lauper and Diana Ross. Creative direction is by the talented Monique Kelly, an original cast member of the Les Girls of Kings Cross from 1973 to 1997.
Prada was told as a young musical theatre student that you could never make a living out of performing drag, but has been self-employed as a professional drag queen for 13 years.
“Giving me the freedom to be myself, drag is a creative outlet where I not only get to sing live and entertain people, but I get to wear fabulous costumes, big hair and killer heels; it’s every gay boy’s dream,” Prada said.
“Drag has also allowed for me to travel.
“If there’s an overseas location I want to travel to, I’m able to book my tour internationally and my work in drag funds the holiday.
“It really is the gift that keeps on giving.”
The greatest joy that drag gives Prada is the satisfaction of helping people forget their worries during the performance.
“When I go out on stage, it’s my mission to help people have fun. When you attend one of my shows you can expect to be uplifted and your sides will ache from the laughing. It really is a feel-good experience.”
Book tickets at lesdivas.com.