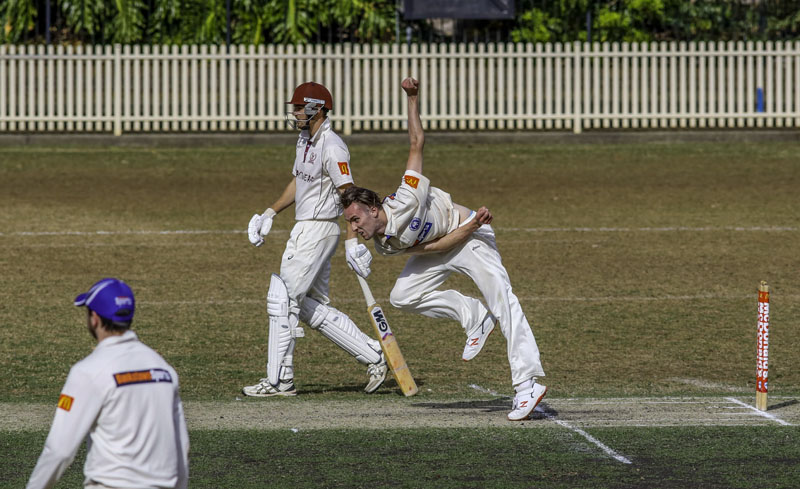 Following his score of 102 in Bankstown’s 9/295, Nathan McAndrew proved the total nemesis to the home side as he ripped through their batting finishing with 4-32 in a devastating spell.
Talented young speedster Liam Marshall, who last week was selected in the NSW Under 19 side to play at the National Championships in Perth in December, joined the rampage returning the wonderful figures of 4-26. His wickets were classical speedster’s dismissals with two caught behind by Cameron Middleton and a spectacular delivery which scattered the stumps.
Ben Le Bas claimed a wicket and the Rangers were touted for 158. Middleton was a tyro behind the stumps with three catches and a run out and kept the Bulldogs fielders on their toes. Actually, the Rangers recovered from 7-12 and the tail at least made the Bulldogs work for the points. Middleton was always near the action with three smart catches and a crucial run out. In the NDs second innings, Marshall claimed the only wicket as the home side finished with 1-37.
Next Saturday Bankstown will take on Mosman over two weeks, with the match commencing at 10.30am.
On Sunday, the Bankstown Sports Bulldogs travelled to Blacktown International Sports Stadium and defeated Blacktown Mounties in a superb display in the Kingsgrove Sports T20 Cup.
After losing Nick Carruthers (21) and Mitch Brown (0) it was skipper Daniel Solway who took control of proceeding smashing 75 not out off just 54 balls. Solway was helped by all-rounders Nathan McAndrew (21) and Aaron Bird (25) as the Dogs posted a solid 5/156.
The talented Jordan Gauchi (78 no) gave the home side a real chance of victory but the Bulldog bowlers stuck to their pre-match plans and restricted Mounties to 6/126 to remain undefeated after two rounds. Nathan McAndrew took 2/20, Liam Marshall, 1/22, and left arm orthodox spinner Ben Taylor, 2/23.