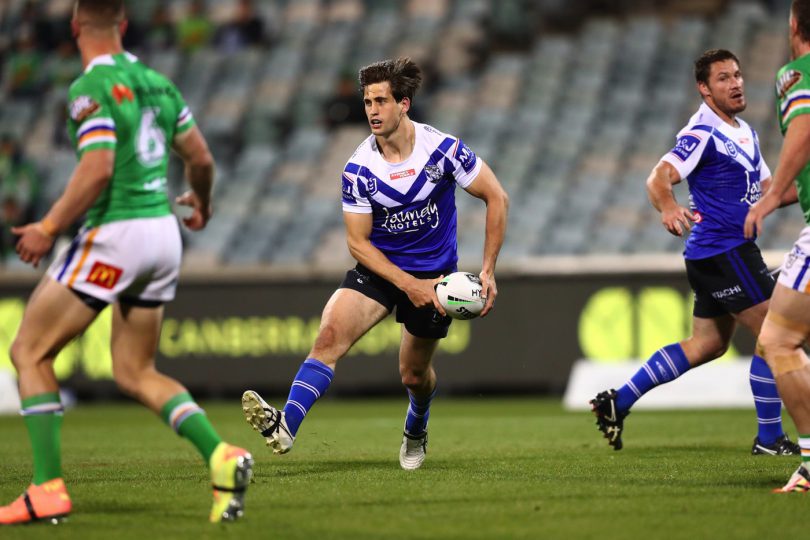 FULL of bark and leading 20-12, Canterbury Bankstown Bulldogs were unable to halt the Raiders’ second half fightback doing down 34-20 at GIO stadium on Sunday night.

For the first 40 minutes, the Bulldogs out-enthused Raiders on their own turf and found fortune with high ball and left-side raids.
After two weeks watching from the sidelines, Dallin Watene-Zelezniak was back in first grade and on the scoreboard within 10 minutes thanks to a pinpoint looping pass by Lachlan Lewis.
Will Hopoate’s night in the nation’s capital started with him burning Canterbury’s captain’s challenge after just three minutes, the fastest unsuccessful referral of the year.
Raymond Faitala-Mariner crashed over for 12-10, with Meaney’s conversion attempt off the upright the only reason Canterbury still trailed.
The next time the Dogs came calling they ended up leading. Kerrod Holland’s bat back straight down to Josh Jackson made for a 14-12 half-time lead.
That is until Holland had another crack as the halftime siren sounded.
It should have been Canterbury’s night but for the swift set of tries by Canberra in the second half and a powerful attack on the Dogs’ defensive line, according to Bulldogs interim coach Steve Georgallis.
“We talked about repeating our first half performance … it’s hard to pinpoint [what went wrong],” he said.
“We just gave Canberra too much opportunity.
“We’re still trying to find a way to win and we haven’t found it yet.”
Bulldogs take on Manly on Friday from 6pm at ANZ Stadium.