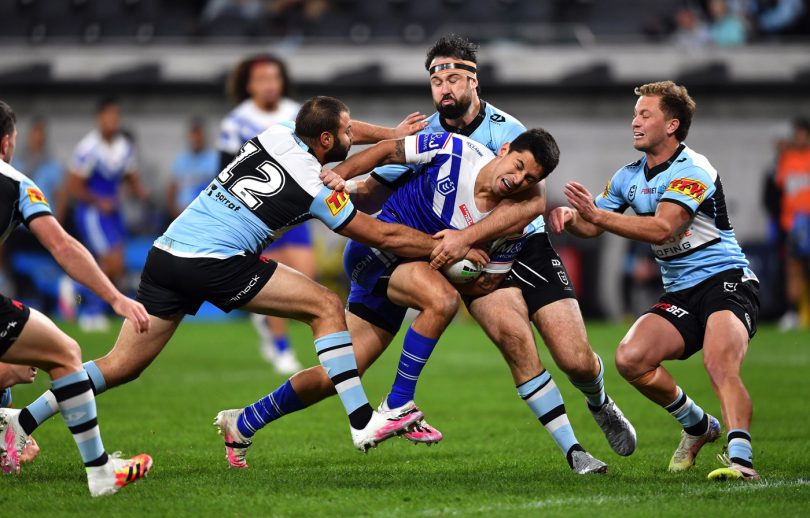 CANTERBURY Bankstown Bulldogs were impressive in their tussle with the Sharks on Sunday night but just lacked the fire-power to get over an experienced side, going down 20-18.

The Bulldogs threatened to pull off a comeback at the death after Christian Crichton scored an intercept try, but Cronulla scrambled desperately to secure their second win of 2020.
For the Bulldogs, the new scrum-base duo of Brandon Wakeham and Kieran Foran showed promise.
A brilliant running line saw Brandon Wakeham hit Will Hopoate through a hole to get the Dogs on level terms midway through the first half.
However Wakeham was placed on report in the second half for dangerous contact and sent to the bin due to repeated team infringements, which led to a second try to the Sharks winger who completed a hat-trick to push out Cronulla’s lead to 16-4 after 51 minutes.
The late fight back was on the cards when Foran dotted down on the end of an Adam Elliott grubber. A length of the field intercept to Bulldog winger Crichton, with 5 minutes to go, put them in contention.
However time was not on Canterbury’s side and they fell short by two points at the full-time siren.
Coach Dean Pay was happy to see his side’s improved performance.
“You’ve seen tonight how much fight they’ve got in them,” he said.
“We learned our lessons last week and they’ve done a bit better.
“There’s no doubt we’re heading in the right direction.”
The Bulldogs next play Wests Tigers on Sunday at 6.30pm at Bankwest Stadium.