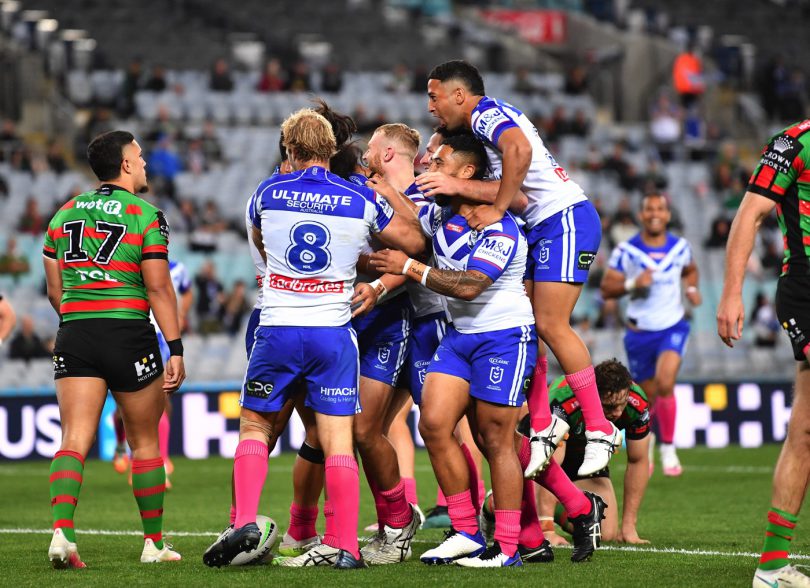 A BRILLIANT Canterbury-Bankstown Bulldogs side have recorded their third win of the season after stunning the South Sydney Rabbitohs 26-16 at ANZ Stadium on Thursday night.

A ferocious 20-0 burst in the opening 26 minutes helped Canterbury climb off the bottom of the ladder with one round remaining.
Needing to be next to score to fight back from a 20-point deficit, the Rabbitohs were awarded a try on the spot in the 32nd minute only for replays to show the winger’s foot out of play.
Striking again shortly before halftime, the Rabbitohs went to the sheds trailing 20-10 and then reduced the margin to four points in the 48th minute but the Blue and Whites held on to give Captain Josh Jackson a win in his 200th appearance.
“That was seven weeks in the making, that game. I’m just so proud of the 17 players,” Bulldogs interim coach Steve Georgallis said.
“We had a few injuries there, lost Lachie Lewis [to a head knock] with his kicking game, Jake [Averillo] played injured that whole second half [with a quad strain]. To the kid’s credit, he stayed on the football field.
“They just kept on turning up in defence. Souths chased us that second half, possession swung, momentum swung but they just kept on turning up for each other. We talked about it all week, don’t leave the game with regrets.
“It was great for Josh. He’s been through thick and thin this year, the captain of the club, led by example. The players were so ecstatic at the end of the game. It’s a good feeling.”
The Bulldogs play their final match against the Panthers at ANZ Stadium on Saturday from 3pm.