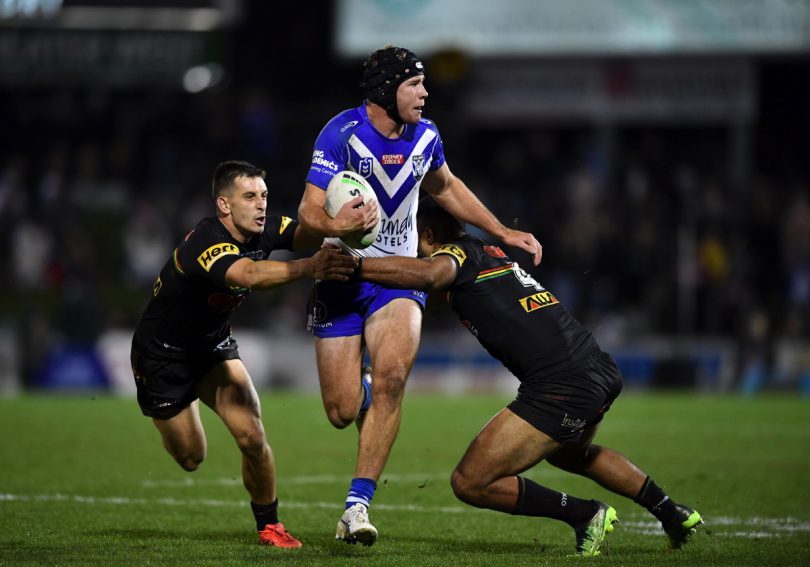 WINGER Josh Addo-Carr and former Penrith star Matt Burton kept Canterbury in the game with some moments of brilliance but it wasn’t enough to stop the Bulldogs going down 30-18 against an Origin depleted Penrith Panthers on Friday night.

Addo-Carr reminded Blues coach Brad Fittler of his try scoring feats after finishing with a 39th career double – both of which were off the kicks from Burton, who scored Canterbury’s other try.
However, the Panthers made them pay for each error as they maintained a four-point lead on the Telstra Premiership ladder from the second-placed Storm and Cowboys.
Bulldogs Captain Josh Jackson said it was a similar story to the past couple of weeks.
“Poor discipline, particularly in yardage and decision making with the footy in crucial parts of the game was poor again tonight,” he said.
“Until we start learning how to control the footy and how to manage a game, it is going to be very hard for us to win.
“That’s not saying that we are that far away because we had them at 22-18 at one point. That is where we have got to be smarter and manage the game a bit better.”
Canterbury interim coach Mick Potter would have been happy with the performance of Jake Averillo at fullback after his switch from centre to replace Matt Dufty and will be hoping to welcome back injured forwards Luke Thompson and Tevita Pangai jnr.
The Bulldogs next take on the Eels this Long Weekend Monday from 4pm at Accor Stadium.