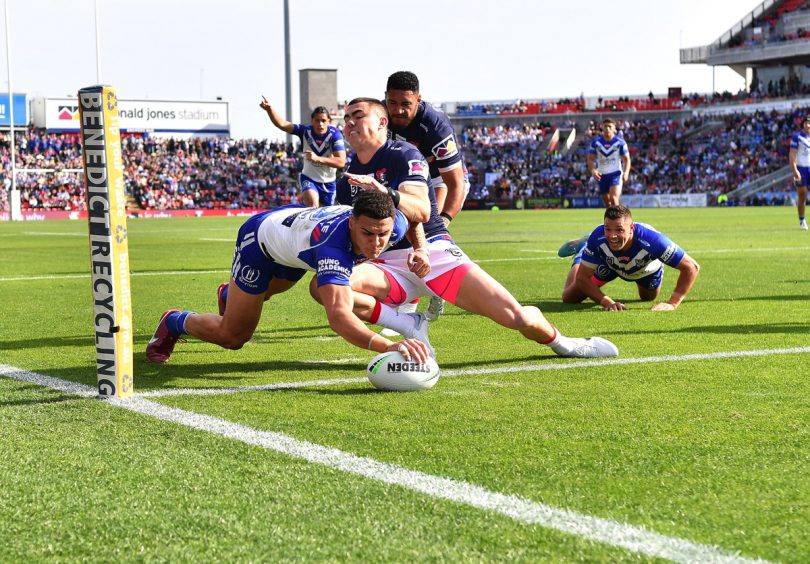 CANTERBURY winger Jacob Kiraz enjoyed a stellar return to Newcastle, scoring a hat-trick as the Bulldogs cruised past the Knights 24-10 at McDonald Jones Stadium on Sunday.

The Bulldogs ran in four tries to two, racking up more than 20 points for the fourth time in five weeks to pile on more home ground pain for the Knights.
Both clubs sat alongside each other on the Telstra Premiership ladder going into the contest but after winning four of their last six games, the Bulldogs have climbed to outright 12th on the ladder.
Kiraz, who spent the off-season training with the Knights before gaining a release to return to Canterbury this year, had a treble by the 44th minute as the Bulldogs racked up a 24-4 lead.
Newcastle enjoyed most of the possession and field position in the second half but the side’s attacking left a lot to be desired.
Two tries from the Bulldogs through Kiraz in the opening 10 minutes set the tone before the Knights jagged a try back.
It was all one-way traffic after that, however, with Aaron Schoupp finishing off a Josh Addo-Carr and Matt Burton special before Kiraz got a third immediately after half-time to set up victory for the visitors.
Bulldogs coach Mick Potter was happy his team showed enough resilience to hold them out enough in the second half.
“The first half was good and we executed some plays well,” he said.
“I think they’re playing well and a brand of footy that suits them. I think they’re enjoying their footy and I’m happy for the players and the fans.”
The Bulldogs take on the Cowboys this Sunday at Salter Oval in Bundaberg from 2pm.