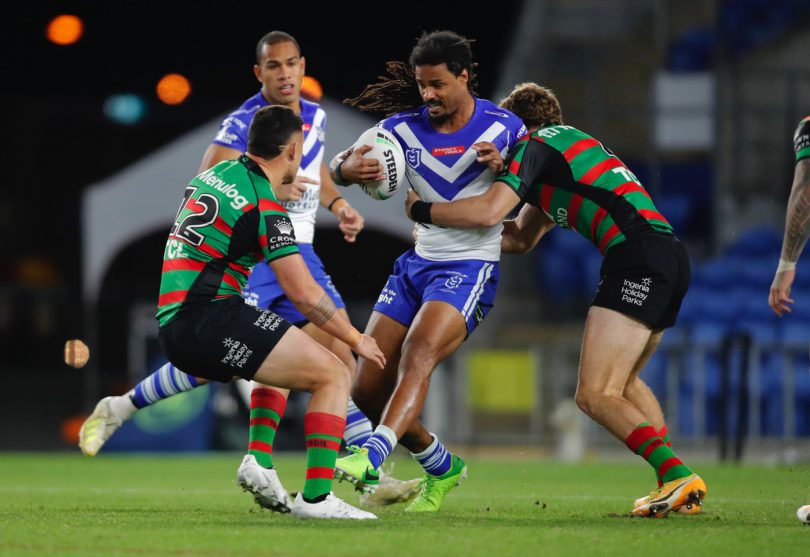 THEY led 12-10 at halftime but Canterbury-Bankstown Bulldogs ultimately suffered an eight-point loss to the South Sydney Rabbitohs at Cbus Super Stadium on Sunday night.

Jayden Okunbor made his first appearance of the season, while Matt Doorey returned from concussion and Ofahiki Ogden was included on the bench.
Trailing 10-0 in the opening quarter, rookie Bailey Biondi-Odo produced some sharp work to set up a try for Aaron Schoupp to have the Dogs behind by four.
Further points were added when a lovely catch-and-pass from Will Hopoate put Corey Allan away down the right touchline to score in the corner. Jake Averillo’s second straight sideline conversion handed the Bulldogs the 12-10 lead.
Johnston added his second try in the opening minute of the second 40, before the Rabbits added a penalty goal to see them lead 18-12.
Sione Katoa came up with a brilliant play in the 52nd minute when he landed a 40/20 to have the Dogs on the attack.
However South Sydney hit back hard with back-to-back tries to lead 28-18 with 15 minutes left in the match.
A 73rd minute try was enough to seal the 32-24 win for the Rabbitohs.
Bulldogs Coach Trent Barrett said they had what it took to win but were let down by yardage errors and penalties.
“We did so well to claw our way back but then had a couple of things go against us,” he said.
“We’ve got to put some more polish on our performances.
“We will get rewarded for our efforts eventually; we know that we’re heading in the right direction.”
The Bulldogs next do battle with the Sharks on Sunday, July 25, from 4.05pm at Cbus Super Stadium on the Gold Coast.