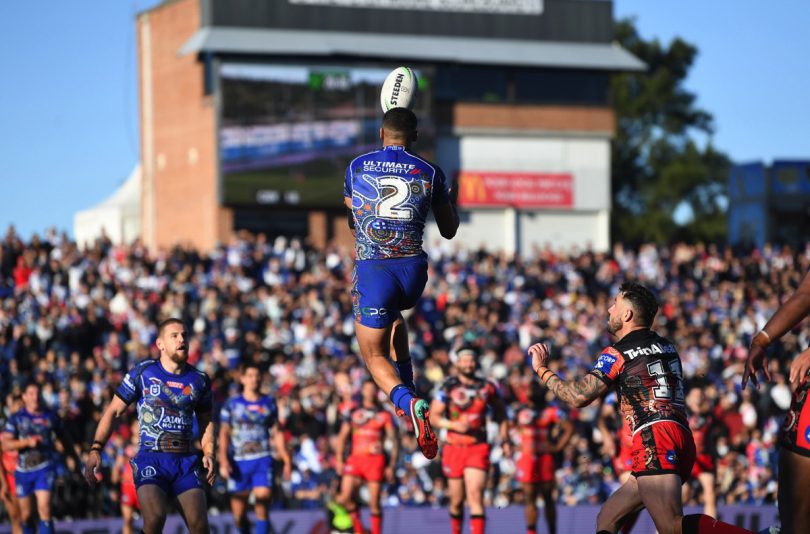 A HIGH flying Jacob Kiraz takes to the air at Belmore Sportsground in front of thousands of screaming fans who were again left disappointed, with the Dogs going down 34-24 to the Dragons.

THERE was a festival-like atmosphere in full swing to mark the return to Belmore for the first time since 2019 but Canterbury Bankstown Bulldogs were unable to triumph over the St George-Illawarra Dragons on Sunday and fell 34-24.
Blue and white were the colours of the day with red trickling through in a show of support from the outnumbered Dragons supporters.
Back to Belmore Patron Luke Brailey said it was great for the community to hold such events.
“There is something special about Belmore Sports Ground. It is the most beautiful sporting facility in the world. We are very lucky to have the big league arrive on our doorstep once a year and showcase the amazing heritage of this incredible sporting venue,” he said.
Played in front of 16,991 fans, queues to gain entry on Sunday, snaked hundreds of metres, with the Terry Lamb Family Hill full half an hour before kick-off.
The Dragons skipped out to a 16-6 lead in the first half but two Bulldogs tries after the break brought the strong Belmore crowd to its feet as the home side stole the lead.
However, crucial errors enabled the visitors to go up by 10 with a quarter of the game remaining.
Canterbury hit back to get within four through Aaron Schoupp but a costly error from Englishman Luke Thompson killed off any momentum they had late.
Interim coach Mick Potter says defence needs to be better.
“It’s certainly disappointing, we were in the game,” he said.
“We let ourselves down with some cheap tries; we’re not tough enough at the moment.”
The Bulldogs next take on an undermanned Penrith Panthers side, with the bonus of Josh Addo-Carr playing after being ruled out for Origin, at BlueBet Stadium on Friday from 7.55pm.