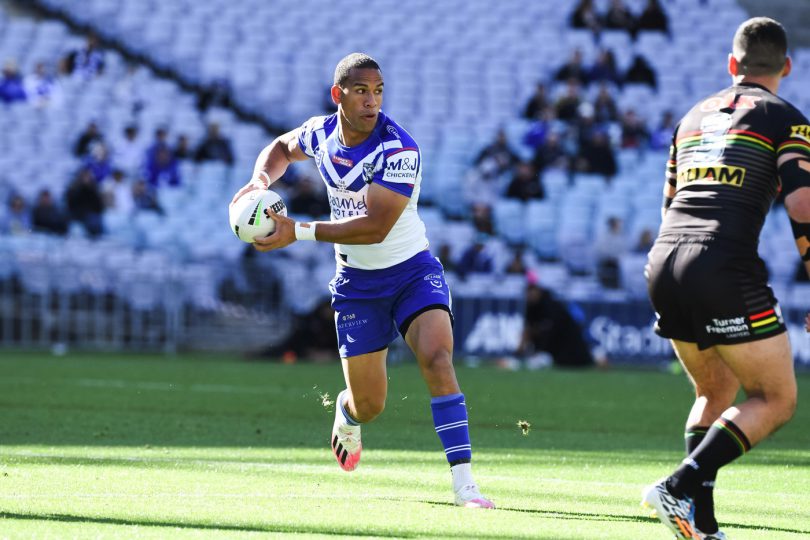 THOUGH saying it was unintentional, Englishman Luke Thompson was referred to the judiciary after being charged with eye gouging during the thrashing given to the Canterbury Bankstown Bulldogs’ 42-0 loss against the Penrith Panthers at ANZ Stadium on Saturday.

Injuries to winger Jayden Okunbor (suspected ACL rupture) and second-rower Raymond Faitala-Mariner (ankle) capped off a bitter end to Canterbury’s turbulent campaign.
Sentiment was in the air to begin the clash with Canterbury farewelling a raft of players. Stalwart prop Aiden Tolman, unwanted by the club next season, was denied the chance to play a 223rd match in blue and white due to a calf injury in the warm-up.
Kerrod Holland, Sauaso Sue and Jack Cogger made their final Bulldogs appearances as the injured Kieran Foran, who is set to re-join Manly in 2021, watched on.
Young Bulldogs outside back Tui Katoa made an assured debut after Okunbor went off in the 25th minute. Then Faitala-Mariner’s afternoon was cut short midway through the second half.
Bulldogs interim coach Steve Georgallis could not hide his disappointment after the match.
“The way the game ended was upsetting,” he said.
“We lost four players before kick-off but they tried really hard.
“Then we had more injuries in the second half; it was just one of those days.
“It’s disappointing we couldn’t finish off the way we wanted to.
“I was happy with Tui Katoa’s debut and Luke Marshall will be working in the off-season now and come back stronger next year.
“There’s more players now with a few first grade games under their belt so there’s a few good signs for the club next year.”