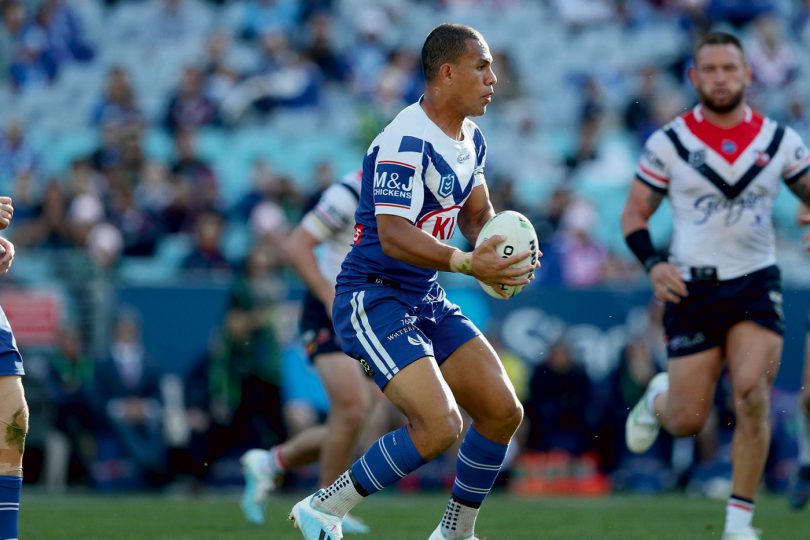 IN a one-way affair which saw the Bulldogs going down 34-6 to the Wests Tigers, the first sign that it wasn’t going to be Canterbury’s night came in the fourth minute when star fullback Will Hopoate had to be assisted from the field with an ankle injury.

After Reimis Smith opened the scoring for Canterbury in the 18th minute, the rest of the match was disappointing as the Tigers raced in seven tries.
Coach Dean Pay said simple errors and a poor kicking game contributed to the loss but it is widely acknowledged Canterbury’s roster has been hamstrung by salary cap restrictions for several years.
“We have always said that we want to put two or three quality players around our young guys and that is how we are going to improve,” Pay said.
“We have got Luke Thompson turning up here this week. He is a quality player, he is an international, he has won premiership in the Super League, he is a fit guy and he has got plenty of leg speed so we are very hopeful.”
The arrival of Thompson is the beginning of a recruitment drive Pay hopes will enable the Bulldogs to be a competitive force again.
Thompson was released from isolation on Sunday and drove from Melbourne to Sydney, but the England Test prop did not arrive in time to see his new team go down to the Tigers.
Pay added: “”At the end of the day there is light at the end of the tunnel.”
The Bulldogs take on the Rabbitohs this Sunday from 6.30pm at Bankwest Stadium.